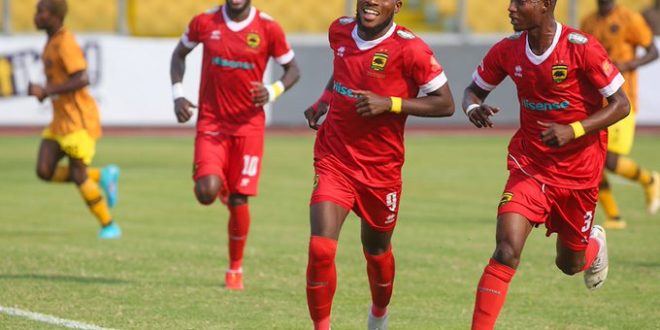 An early howler from the host nearly gave the visitors the lead after just three minutes from kickoff but a great intervention from Yussif Mubarik saved the situation.
Kotoko were given a penalty on the 13th minute after Steven Mukwala was brought down in the box. The Ugandan elected himself for the kick and sent William Essu the wrong way to snatch the lead.

On the 30th minute, Mukwala once again came so close to doubling their lead but his effort went off the post. Just unlucky!

Just on the stroke of half time, there was an appeal for penalty from Legon Cities after Kofi Kordzi was brought down but the referee played on

In the second half, the Porcupine Warriors returned with two quick substitutions; taking off John Tedeku and Nicholas Mensah to bring on Patrick Asmah and Stephen Amankona.

Just and when they were hoping for a turnaround from the changes made, Legon Cities got themselves back on level thanks to Mohammed Sadat’s effort in just four minutes from the break.

Another Legon Cities opportunity in search for the second but Justice Blay raced back as quick as possible to concede a corner kick which ended up wasted.

Bernard Morrison came so close to restoring Kotoko’s lead but his strike went off the post. They are pushing more men upfront in search for another goal.

The Royals nearly took Kotoko by surprise after substitute Croster Obour Adu curled one from the edge of the box but was dealt with nicely by Frederick Asare. That was a goal-bound effort!

It ended 1-1 after full time. Kotoko drops to third on the league log with 14 points, whiles Legon Cities remain 6th with 11 points.