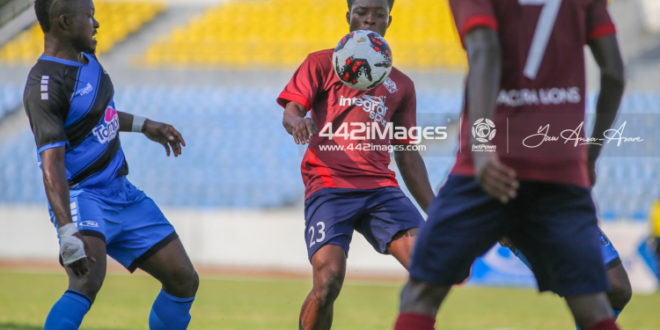 A first half strike from Augustine Boakye a.k.a Lukakuuuu  was enough to seal a 1-0 win for Kotoku Royals FC over Accra Lions at the Cape Coast Stadium.

Accra Lions began their top-flight league campaign in Cape Coast following the disapproval of their home venue — Oda Stadium — by the Club Licensing Board.

Augustine Boakye beautifully scored the the only goal in the game on the 19th minute for Kotoku Royals.

Boakye’s strike was the first goal for debutants Kotoku Royals in the Ghana Premier League.

Both Kotoku Royals and Accra Lions were cautious in the first embers of the game.

Accra Lions tried to open the defense of Kotoku Royals early minutes of the second half, but they shrugged off the threats.

Accra Lions dominated possession but found it difficult to find the back of the net.

Seth Ablade’s boys managed the game in the dying minutes of the game to cruise to victory.

Kotoku Royals are fourth with three points whiles Accra Lions are seventeenth without a point in the betPawa Premier League.