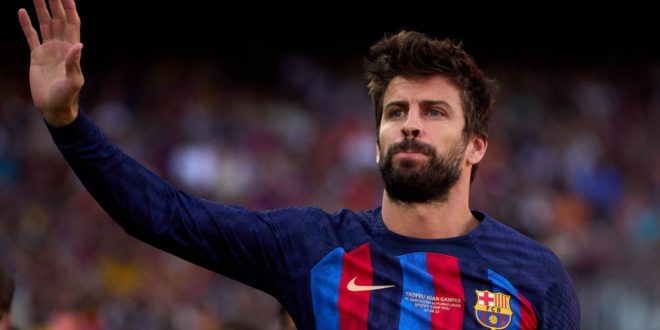 Barcelona and Spain defender Gerard Pique has announced his retirement from football and will play his last match against Almeria on Saturday.

Pique, who won numerous trophies with Barcelona and the 2010 World Cup with his country, has fallen out of favour this season under Xavi Hernandez.

The 35-year-old had been a near-constant fixture in Barcelona’s starting line-up after joining from Manchester United in 2008, but in recent years had started to suffer from regular injuries.

Gerard Piqué announces he is retiring from football and will play his last match for Barcelona this Saturday 🔵🔴 pic.twitter.com/yCe6gg9sk7

In the 2020/21 season he made just 18 league appearances, and 23 overall for his club. In this season he has made only five league starts and nine in total, with four coming in a disappointing Champions League campaign which has seen the side fail to qualify for the knockout stages.

The arrival of players such as Eric Garcia and Ronald Araujo have forced him down the pecking order at Camp Nou.

Pique made his professional debut for Manchester United in the 2004 season after joining as a teenager from Barcelona. He spent the 2006/7 season on loan at Real Zaragoza and left to return to his boyhood club, with Nemanja Vidic and Rio Ferdinand offering him little chance of regular football under Alex Ferguson.

Pique retired from international football in 2018 and scored five goals in 102 appearances, while also making 10 appearances for the Catalonia representative side.

He won the 2010 World Cup, following it up with the 2012 European Championship.

For Barcelona, he played 615 times, netting 52 goals. With Barca, he won eight La Liga titles, seven Copas del Rey, and three of each of the Champions League, Super Cup and Club World Cup.

Off the pitch, he is the founder of Kosmos Holding, a media investment group, which has a deal with the International Tennis Federation to be involved in the Davis Cup, and also owns Spanish football club FC Andorra, as well as investing in another Spanish club, GImnastic Manresa.