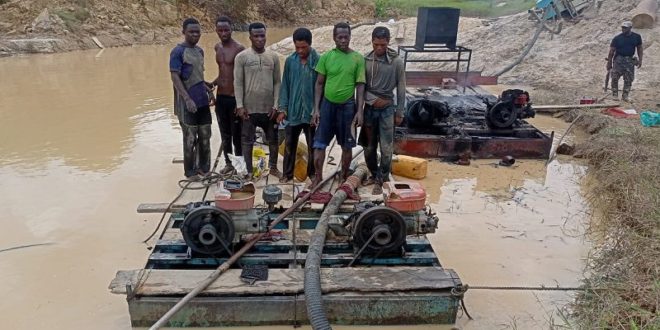 The Nhyinahin District Court in Atwima Mponua District of the Ashanti Region has remanded six illegal miners arrested in Atuntuma by the Ghana National Association of Small Scale Mining into prison custody.

The suspects are to reappear on Friday in court to know their fate.

In an effort to complement government’s clampdown on galamsey operators, the National Taskforce of the Ghana National Association of Small Scale Miners (GNASM) has arrested six persons for illegally mining at Atuntuma in the Atwima Mponua District of the Ashanti Region.

The suspects include five persons from Volta Region and one person from the Ashanti Region.

They were caught mining on the River Offin in Atuntuma community and other communities within the Atwima Mponua District of the Ashanti Region.

The taskforce retrieved and destroyed over a 100 changfang machines, water pumping machines and other mining equipment.

This arrest follows a similar one conducted by the Lands and Natural Resources Ministry a few weeks ago in Birim North and other districts in Eastern and Ashanti regions respectively.

The special taskforce saw the arrest of six illegal miners and the destruction of several mining equipment in the area. 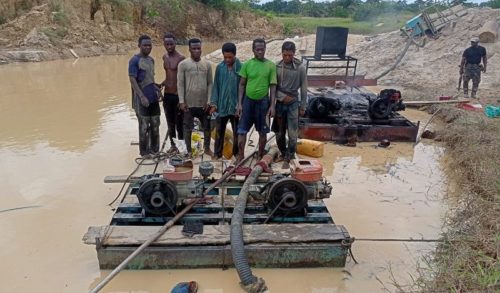 The swoop by the taskforce forms part of government’s rejuvenated and renewed fight against illegal mining in the country.

The six suspects arrested appeared in Nhyinahin District Court and have been remanded to reappear on Friday.

The members of the taskfoce expected stiffer punishment for the suspects to serve as a deterrent to others.

The commander of the taskforce, Patrick Don-Chebe, said they have been to many communities in the area and the illegal miners are destroying the water bodies in the area.

“We came across people who were washing into the Offin River directly, so as taskforce members, we want to assure the people that we are not going to stop this operation here. It will continue till they put a stop to it. “We have arrested six people so far and all of them are Ghanaians. Investigations are still ongoing to find out more about these galamsey operators who have been arrested.”

He mentioned that the exercise is to support government to clamp down on galamsey operators whose activities are against the best practices.

“We expect the law to deal with those arrested to deter others from such act,” he said.

“The Assembly is appealing to the traditional rulers, opinion leaders and others to support them in their efforts to clamp down on illegal miners in the area,” he stated.

He said the Assembly will put in every effort to clamp down on them and also identify their financiers.

“We have identified that the area has become a hotspot for these galamsey operators. They are very stubborn and we will deal with them.”