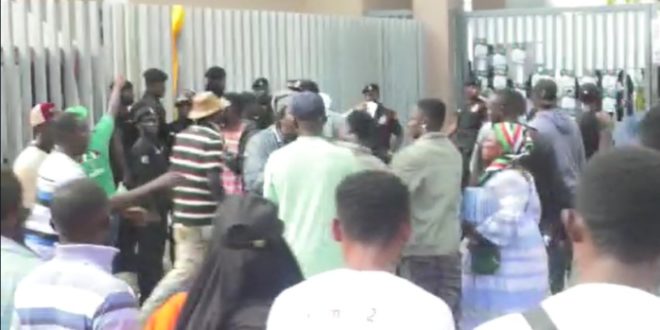 Some persons believed to be thugs of the National Democratic Congress (NDC) on Sunday clashed with police at the Regional Delegates Conference in the Ashanti Region.

The heavily built men who did not have accreditation were prevented from entering the Kumasi Sports Stadium where the elections were being held.

The police managed to arrest one of them as they restored calm. But his colleagues will not allow the police to take the suspect away; resulting in some altercation.

“The guys vowed that they will not allow the police to take the suspect away. So they fought them for a while,” an eyewitness spoke anonymously.

The young men, numbering about thirty, were angered by a warning shot from the police in an attempt to disperse the crowd.

This resulted in a free-for-all fight between them and the police. They pelted the police with stones while the police also resorted to the use of the butts of their rifles.

In the end, the police had to leave the main entrance to restore calm.

Meanwhile, the use of thugs in local elections violates electoral laws.

According to Election Committee Chairman Nuru Hamidan, security will not be compromised in the electoral exercise.

Previous Closure Of Twitter Africa Office Unfortunate – Akufo-Addo
Next Bawumia Needs A Token Of US$200,000 As ‘Appearance Fee’ To Approve Investment  – Adu Boahen ‘Confesses’ To Anas