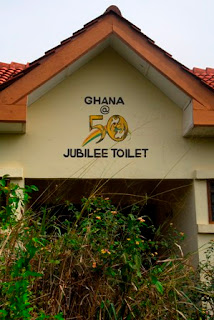 To live a more decent and dignified live in a given geographical area, having access to decent toilet facilities is a must and also non-negotiable deal. However, the readily availability of toilet facilities in our communities is an essential element in our decent lives. It also creates room more comfortability for the live of the people within a given society. For instance, with the greatest of respect to my dear readers, I just want to engage your mind on a scenerio whereby, one is suffering from a critical diarrhea and lives in an area where there is no toilet facility. Now, what do you think the probable effect or result would be? Essentially, myriad of communities in Ghana have been battling with the glare problem of absence of toilet facities for quite a long time now. In fact, a thorough research in Ghana will tell you that, many communities are faced with the problem of lack of decent toilet facilities. However, it is indispensably critical to note that, availability of decent toilet facilities in our immediate communities promote good health. However, people become more healthier when they have access to decent and modernized toilet facilities. Conventionally, the term “abandoned projects” in the circus of government appears to be overly used in our political discourse in this country. However, one becomes extremely bewildered to see a sitting government abandoning his own projects that were proudly started by itself.

It can be recollected by all Ghanaians that, since the inception of the government of H.E Nana Addo Dankwa Akufo Addo in 2017, a massive nationwide toilet projects were aggressively embarked on in the year 2018.  However, these toilet projects are obviously dotted around every nook and crany in this country. In fact, it has been almost Four (4) years now since these projects were commenced by the Akufo Addo government. My search revealed to me that, these toilet facilities are under the auspices of Ghana First. Regrettably, these heavily invested toilet projects are glaringly abandoned for no apparent reason given to the prospective beneficiaries of these projects.

However, the abandoned toilet projects are presumed to be caused by the following reasons:

From the available historical antecedents, in most cases, in Ghana, a lot of governmental projects come to an abrupt halt fundamentally due to the problem of lack of funds to complete projects and finally commission and hand them over to the people for use. In fact, my ground research conducted, revealed to me that, almost all the toilet projects started all over the country, mostly roofed and plastered, are abandoned due to the fact that, the government owes the various contractors who are working on these projects. In fact, let me state it quite clearly that, Derma, my hometown is lucky to have two (2) of such facilities, nicely roofed and plastered and they are gradually becoming white elephants in the town.

See also  IMF’s Mission To Ghana Has Been Constructive; Another Team Coming Soon

Lack of Political Will and Commitment
Apparently, it does appear that, the government through Ghana First as the Projects Coordinator is not showing any substantial level of political will and commitment in execution, continuation, and commissioning of these toilet projects hugely built around the country. It sometimes, it gets so irritating and discomforting to see a government failing to continue projects which have received oodles capital injections. However, the citizenry always see this phenomenon as a clear instance of financial waste or loss to the state which in mind, the government should be seriously questioned and ultimately punished by way of subsequent elections.

Conspicuously, the incessant abandoning of government projects in whatever form is a clear case of priority lacuna or gap theory. This is however, the case that, sometimes, certain priority areas of the government are not set right. In that case, some projects may be hurriedly started and later abandoned for whatever reasons. In analysing public/government policies or priorities, all other things held constant, government sometimes, gets it all wrong for embarking on certain projects such as these toilet projects dotted around the country. However, the revelation and reality of the matter is that, more often than not, governments of all times and over the years, make decisions to fulfill some political campaign promises made to the electorates in an electioneering atmosphere and not really having the taste of right priority to initiate, complete and commission projects to augument the living conditions of the poor citizenry.

Irrefutably, there are no two ways about the fact that, the glaringly abandoned toilet projects dotted around the country have some damning effects or repercussions on the lives of the people of this country.

However, some of these repercussions are given as follows:

Out-break of Diseases
Once again, it is the case that, the obvious lack of decent and modernized toilet facilities also promotes out-break of diseases such as cholera, typhoid etc in our communities. However, this situation poses a serious threat to the health system of our country and people. In fact, in a case whereby there is an out- break of cholera, the government through the Ministry of Health will have to spend a substantial sums of money to get the situation arrested.

Hideouts For Criminals
Clearly, these abandoned toilet facilities are now serving as hideouts for the criminals within our society. In fact, most of the criminals (i.e thieves, armed robbers, rappist, murderers etc) in our communities have made it a point to hide their various anti-social or societal activities in these abandoned toilet facilities and finally inflict on the poor innocent citizens in our communities during relatively quiet time or the night. The recent revelation however, is also that, these abandoned facilities are now the comfort smoking base of these miscreants within our communities. In fact, it needs mentioning that, this case also puts unreasonable fears into the people.

Suggested Remedies/Antidotes/Solutions
Just as this situation has some causes and effects on the citizenry, the following suggested remedies/antidotes/ solutions are given to counteract or mitigate the phenomenon:

Prioritizing Toilet Projects
Agreably, toilet projects should be seen as one of the most important social amenities needed by the people within our communities. However, it must be prioritized by the government of H.E Nana Addo Dankwa Akufo Addo through the various Metropolitan Municipal and District Assemblies (MMDAs) to see to the timely provision of decent and modernized toilet facilities for the people within their vicinities or operational areas.

As a matter of sine qua non, I would be so much glad to see the government of the day, boldly exhibiting some degree of financial commitment towards the initiation and completion of toilet projects where and when necessary or needed. In fact, I would like to make a passionate appeal to the government of H.E Nana Addo Dankwa Akufo Addo to treat it as a matter of urgency to ensure the continuation, completion and commissioning of those abandoned toilet projects dotted around the country before leaving office as our President of the land. In fact, he should consider the degree of financial investments already made into these abandoned toilet projects. However, in order for his government not to be seen as wasteful, I would plead with him respectfully and humbly, to see some level of wisdom in continuing, completing and commissioning of these Ghana First toilet projects.

Settling-off All Debts Owed Contractors by the Government
In fact, when I put my ears on the ground, I came to know that, the main reason that has caused the abandoned toilelt projects is the fact that, the contractors are owed by the government/Ghana First. From a contractual perspective, obviously, no contractor would continue executing a project when some part payments supposed to be paid by the government/Ghana First as agreed upon by both parties during the contract negotiation stage are in debts. However, with the utmost respect and humility, it is appealed to the government/Ghana First to swiftly settle off all debts owed by it or them to enable the variuos contractors to finish these abandoned toilet projects near completion.

Conclusively, I want to conclude my article by reiterating the point that, these abandoned toilet projects by the government are owing to the causes profusely abduced in this article. Seriously speaking, these abandoned projects are now serving as safe havens for poor sanitation conditions and also hideouts for criminals in some communities in Ghana.

Disclaimer: Opinions expressed here are those of the writers and do not reflect those of TodayGhanaMedia.com . TodayGhanaMedia.com accepts no responsibility legal or otherwise for their accuracy of content. Please report any inappropriate content to us, and we will evaluate it as a matter of priority.