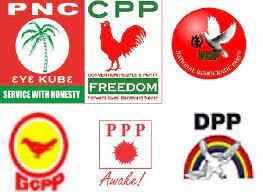 All The Smaller Parties To Join Forces To Kick Out NPP, NDC – Percival Akpaloo Hints

The Founder and Leader of the Liberal Party of Ghana (LPG), Mr Percival Kofi Akpaloo has hinted that he has met and wooed almost all the smaller parties in the country to join forces and come together as one party moving forward.

That, he believes will create a stronger third force that will change the New Patriotic Party (NPP) and National Democratic Congress (NDC) narrative and to move Ghana forward.

Over the years, Ghanaians have voted for the NPP and the NDC, making the two the major political parties since the 4th republic.

Despite the above, some smaller parties including the Convention People’s Party (CPP), Progressive People’s Party (PPP) and most recently the Ghana Union Movement (GUM) have performed fairly well during election.

However, they have not been able to supersede any of the major parties, making their followers suggest they come together to form a stronger party.

Speaking on Atinka TV‘s morning show, Ghana Nie with Ekourba Gyasi Simpremu, Mr Percival Kofi Akpaloo said he personally spoke to the parties to convince them to come together to form one big party but he is yet to receive response from them.

Mr Percival Kofi Akpaloo said although the response has been positive so far, he has given them time to think about it, saying whether they come or not, the LPG will continue to do its work.

Meanwhile, he debunked claims that these smaller parties do campaigns but in the end, throw their support behind the major parties during the elections, saying that was a misinformation by the media.

Previous Audio: Dr. Bawumia Was Not Well-Known In The NPP Party – Majority Leader
Next Call Your Media Guys To Order And Stop Insulting Us Else – Ash. Reg. NPP Communicators To Wontumi