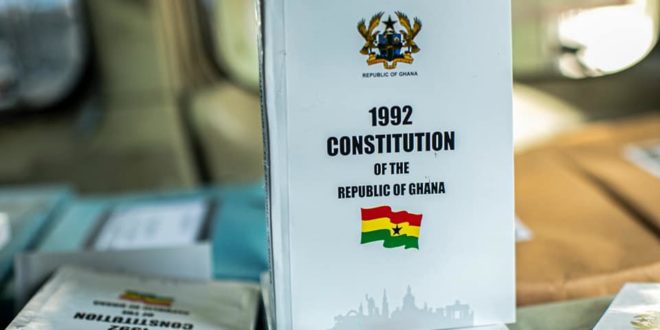 A Retired Professor Of Education Calls For Review Of 1992 Constitution

The Chief of Krom-Adwafo in the Bosomtwe District in the Ashanti Region of Ghana and also a retired professor of Education, Nana Osei Piesie-Anto, has called on the National Peace Council to initiate moves for a comprehensive review of the 1992 Constitution.

Speaking to Nana Yaw Peprah of Oyerepa Fm Kumasi, Nana Piesie reiterated the fact that, after 30 years of practice of the constitution, it is obvious that some aspects of the 1992 Constitution needed review to meet the exigencies of our time. In fact, the Trades Union Congress, leading members of the ruling government and the opposition, the academia, tradional leaders, Civil Society Organizations and the Clergy have all called for its review to sharpen the rough edges that militate against its effective practice.

“Issues that easily come to mind include reducing the powers of the Executive to insulate state institutions from overburdening governmental control; the question of excessive remuneration of Article 71 holders; strengthening the rules governing the functions and roles of the Electoral Commission in organizing elections; revisiting the role of chiefs in politics and local governance; and the question of separation of powers in its true sense of practice whilst maintaining the concept of checks and balances”, he said.

In a reply to a question by Nana Yaw why the National Peace Council, the University professor of the Ghana Technology University College, Nana Osei Piesie-Anto said that Institution has a national character and the capacity to establish Committees of Experts on all critical areas that needed review.

He also stressed that the sensitive nature of certain areas in the Constitution needed a more neutral body like the National Peace Council to avoid complacency and bias.

Nana Piesie suggested that, the recommendations of the Constitutional Review Committee established in 2010 by the late Atta Mills administration could be used as a point of reference by the various Committees in reaching out to think tanks, experts, identifiable groups and the general public.

Previous Open Letter To NPP Gen. Secretary And National Leadership – Yusif Adams Writes
Next POS To Gov’t: The Public Health Concerns of Marijuana; Grant Amnesty To Prisoners Of Drug Use