Breaking News
Home / Business / Akyem Oda Traders To Nana Addo: “Fix Our Market Now Else We Will Vote Against NPP In 2024” 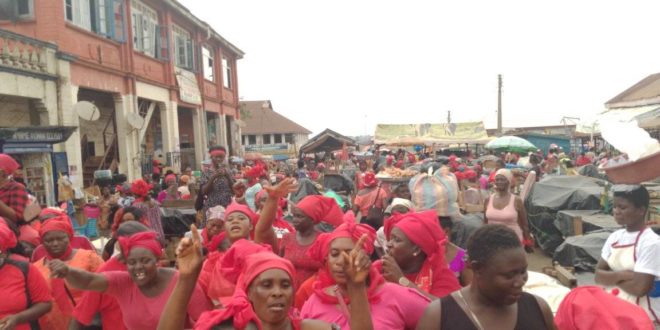 Akyem Oda Traders To Nana Addo: “Fix Our Market Now Else We Will Vote Against NPP In 2024”

The traders at the Akyem Oda Central Market in the Birim Central Municipal Assembly of the Eastern Region have threatened to vote against the New Patriotic Party (NPP) government if their Market is not reconstructed before 2024 general elections.

During the 3rd quarter of 2021 in September 13th, the Akyem Oda main Market was struck by an inferno which saw many market women displaced from their trading locations in the market.

The disaster saw some of the Akyem Oda Market women receive loan funding from the government as compensation to cater for their losses with a promise that the market will be rebuilt.

The traders said their constant complaints about the market have fallen on deaf ears.  On 8th August, 2022, today, the displaced traders have embarked on a 4 days sit-in protest against the Municipal  assembly concerning plans to resettle them at the New Oda Station sited in the Akyem Oda Nkwantanum stretch.

City authorities have asked the traders to move to satellite markets to pave way for the Oda Market redevelopment project.

However, the yam and meat sellers are in a standoff with the second-hand clothing sellers, as they all lay claim to the same trading space.

Clad in red and black, the aggrieved traders told Ahenkan FM / MyGhanaMedia.com reporter about their disappointment in the local management’s relocation.

Some heads of traders have expressed their disappointment with the Municipal Assembly on a directive issued to them to relocate to the New Oda Station sited at the Akyem Oda Nkwantanum stretch.

They explained that, the place chosen for them by the Municipal Assembly is a waterlogged area which will make their movements with trading stuffs challenging for them.

They said that, they have communicated severally with the Municipal assembly to act on their demand yet they have refused to consider and act on their request.

The market women warned that, if the government fails to grant their demands, they will cease all trade on Thursday 11th August 2022 and embark on a massive demonstration on the day.

According to the market women they are not going to sell any item to anyone until they finished their demonstration on Thursday.

They added that, they rather prefer a location in the Attafuah area in the Akyem Oda Old town environs since the government has failed to renovate the old main market for them.
Some of the market women further urged the government to help in rebuilding the damaged market, saying it was the only source of employment for them (traders).

“NPP – government should fix our Market for us else we will vote against them in the upcoming 2024 general election” , Akyem Oda Market Women said.

Previous The Youth Should Be Motivated To Engage In Citrus Farming – Prof. Godfred
Next Orbis International Gifts Eye Care Equipments To Some Hospitals In The Ashanti Region.