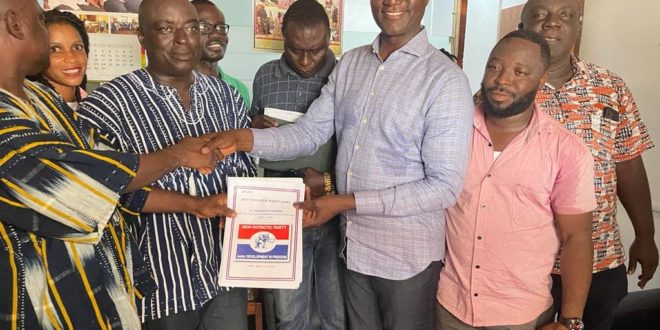 The forms were filed by himself in accompany of his affable campaign team  at the Eastern Regional Party’s Headquarters  on Tuesday,  May 17, 2022.

He was welcomed by a cheerful crowd of supporters clad in NPP colours.

Mr Jeff Konadu Addo is currently the eastern regional secretary for the ruling New Patriotic Party (NPP) and he is seeking the mandate of delegates to occupy the regional highest office.

Mr. Jeff in submitting his forms at the party’s regional office in Koforidua, expressed the hope that delegates in the region will miraculously give him the nod to lead the party to victory in the 2024 general elections.

He however called on the NPP fraternity to avoid strife and acrimony in the coming primaries.

“I am unifyer and so we expect all his supporters and the NPP family to avoid any act that will divide the party”, he said.