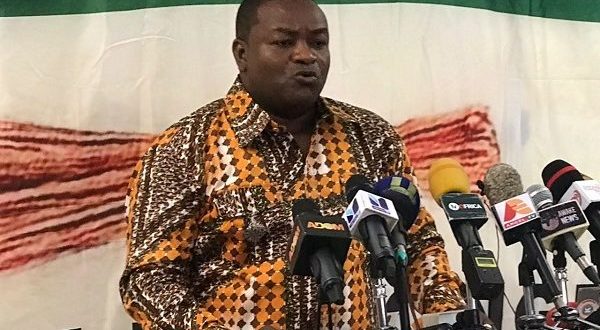 Fuel To Be Sold At Ghc100 Per Gallon- Dr. Hassan Ayariga Predicts

The founder and leader of the All People’s Party ( APC) , Dr Hassan Ayariga, has predicted the selling of a gallon of fuel for Ghc100 in the next coming months.

He said, this will bring more hardships to Ghanaians and likely to cause a shutdown of the economy.

According to him, the Oil Marketing companies ( OMCs) are spending more to import the product into the country and are expected to continue to pass on the cost to the ordinary Ghanaians, since they are in business to make money.

This, according to him, is bound to happen, because there will be shortages of fuel when it cannot longer be brought into the country, leading to its scarcity and subsequent high prices.

The situation, he pointed out is compounded by the many taxes government has imposed on the petroleum price build up.

To avert this, however, he called on the government to resource the Tema Oil Refinery( TOR) in order to refine Ghana’s oil, rather than importing the refined product.

Speaking at a press conference yesterday, July 6, 2022 on a wide range of issues, Dr Ayariga was of the view that revamping TOR and allowing the Ghana Oil Company ( GOIL) to sell product will stabilize the prices.

“Even though when I advice them they don’t listen, this is the time for them to do something practical about the situation, he noted.

The government, he indicated cannot pretend to say they do not know how to make life better for the people.

For the fact that the country seem to be heading in an abyss, in spite of the current members of the Economic Management Team(EMT) Dr Hassan Ayariga, further suggested the setting up of another Economic Management Team, which will comprise of professionals in industry, the TUC, teachers and other non- political actors, who will be more nationalistic in decision-making, rather than those with political interest.

On his take on Ghana going to the IMF, he wished the country never applied to go to the IMF, because he said Ghana, has been there 17 times which yielded short- term benefit .

In his view , Ghana was already broke before the advent of Covid- 19 and the Russia- Ukraine war, which is why he finds it unacceptable when these two aforementioned factors are being cited for causes of the dwindling economy of the country.

“ All non performing appointees should be removed and this will reduce the pressure on the country ‘s economy “, he suggested.

“ The country is not only broke but bankrupt. We are not generating enough revenue and the e- levy has been a disaster “, he indicated.