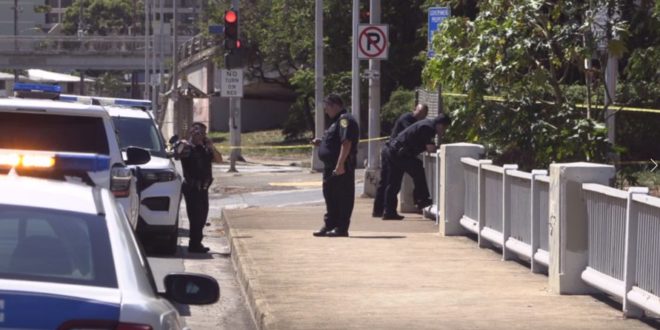 The office of Maryland’s attorney general has released the name of the man shot and killed by Frederick County sheriff’s deputies earlier this week.

Aaron Mensah, 23, was shot at about 2:15 a.m. Tuesday on Zoe Lane, the office of Attorney General Brian Frosh said.

The sheriff’s office said he was armed, and that they had responded to the area because his sister called 911 and told them he was stabbing their parents.

Mensah’s father died later at a hospital. His mother was taken to a hospital and being treated.

On Tuesday night, the sheriff’s office said an initial look at the case found that deputies and Maryland State Police troopers found Mensah with a knife after the stabbing.

The officers who encountered him reportedly told him to “drop the knife.” After that, one officer shot him with a bean bag round from a shotgun.

That, the attorney general’s office said, was followed by Mensah “rapidly moving toward the officer.” Multiple officers deployed their stun guns and three officers fired on the man with their guns.

Frosh’s Independent Investigations Division is handling the investigation. While the deputies who fired their guns were not wearing body cameras, other officers involved were, and their cameras captured portions of what happened.

The video will be released in 14 days, unless it is deemed to be problematic to the investigation.