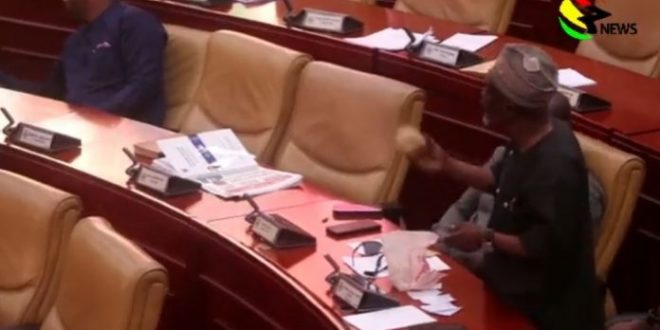 The Member of Parliament for Sagnarigu, A.B.A. Fuseini in his quest to demonstrate the economic hardship in the country to Parliament stormed the chamber with kenkey and fish Monday.

He says the impact of the economy on the cost of living would best be described by a normal commodity such as kenkey and fish which hitherto was affordable by.every household unlike recently.

The MP, showing the ball of kenkey and fish to the Speaker said the ₵2 kenkey is now sold for ₵4 whist the fish is now ₵12 unlike the ₵6 it used to be sold.

As a result, he called on the 98 MPs from the Majority caucus seeking the ousting of the Finance Minister to up their game to get him out.

Ken Ofori-Atta’s “crass incompetence” according to Mr. Fuseini, is the reason Ghana’s economy has been pushed into a “ditch”.

Watch him speak in the video below:

Sagnarigu MP, A.B.A Fuseini takes kenkey and fish to the floor of Parliament to demonstrate how the economy has impacted cost of living.

How much do you pay for Kenkey and fish now?#3NewsGH pic.twitter.com/AoE70NnMU3