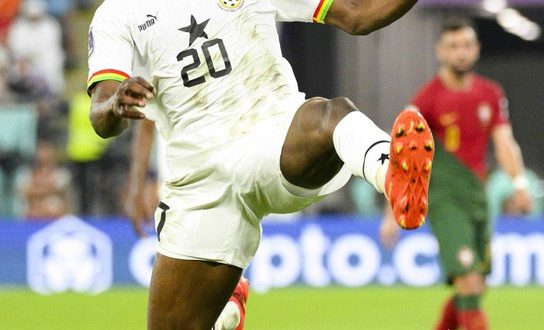 Dutch giants Ajax Amsterdam have expressed pride in midfielder Mohammed Kudus despite Ghana’s early exit from the World Cup. The 22-year-old took the tournament by storm and was Ghana’s best player after three games.

A 2-0 defeat at the hands of Uruguay meant Ghana left the competition with a win in three games.

However, Kudus returns home with some pride after contributing three goals at the World Cup for Ghana. He scored two and assisted three. He also won a penalty which was missed by Andre Ayew in the game against Uruguay.

See also  Afriyie Ankrah To Gov’t : Aside Ghana Team, Do Not Take Any Supporters To The World Cup

Ajax took to social media to show support for the youngster.

“We are proud of you Mohammed Kudus,” wrote the club on Twitter.

Kudus will return to Amsterdam to rejoin his teammates as they continue preparations ahead of the resumption of the Dutch Eredivisie after the World Cup. The former FC Nordsjaelland player is Ajax’s leading marksman with nine goals across all competitions this season.

See also  Everton Offered Me A Great Opportunity; I Wanted To Try It – Mohammed Kudus

Earlier, the former GhanaKevin-Prince Boateng has been impressed by the performances of Ghana midfielder Mohammed Kudus at the World Cup in Qatar. The Ajax midfielder has been in blistering form for the Black Stars, scoring two goals and providing an assist in two matches.

Kudus was the Man of the Match on Monday with his brace, as Ghana defeated South Korea 3-2 at the Education City Stadium in an epic encounter.

See also  2022 World Cup: German Referee Under Fire For Not Awarding Uruguay A Penalty Against Ghana

Brace-hero Mohammed Kudus has been awarded the Man of the Match after Ghana’s entertaining victory over South Korea, in their second Group H game at the World Cup. The Ajax star scored twice to help Ghana to a 3-2 victory at the Education City Stadium in Al Rayyan on Monday afternoon. 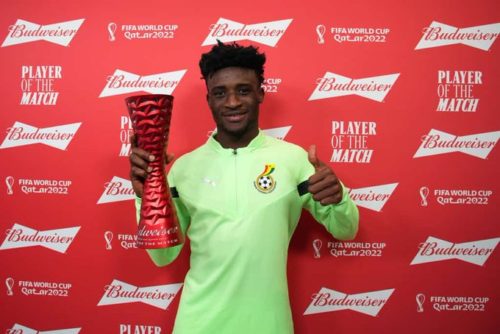 The 22-year-old gave Ghana a two-goal lead before half time, after connecting to a Jordan Ayew cross and smashing home the winner following a pass from Gideon Mensah, which was first missed by Inaki Williams.