Breaking News
Home / National News / Asaman-Tamfoe Chief Dares Okyenhene: You Can’t Destool Me, You Are Not A King Maker 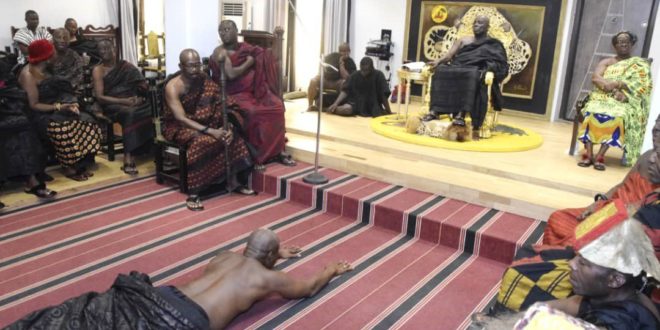 The Benkumhene of the Asaman-Tamfoe, Nana Boakye Darkwa, has denied allegations of involvement in illegal mining and pointed out that the Okyenhene, Osagyefo Amoatia Ofori Panin II, broke traditional norm by destooling him.

He has, therefore, dared Osagyefo Amoatia Ofori Panin II to provide evidence of his allegations.

“If Okyenhene has concluded that I am an illegal miner, then I urge him to report me to the relevant national and appropriate institutions for redress,” he stated in a rebuttal press conference on Thursday, December 1.

“I have never been into mining. In 2018, I was adjudged the Best District Cocoa Farmer in Atiwa West. I can therefore not renege on this honour by encouraging the desecration of cocoa farms.”

About a month ago, the Environmental Task Force of the Okyeman Traditional Council clashed with residents of Asaman-Tamfoe on allegations of illegal mining.

The Benkumhene, Nana Boakye Darkwa, held a press conference to deny his community members were involved in illegal mining and accused the Taskfoce of failing to do due diligence.

He was subsequently summoned by the Okyenhene over the issues arising from his press conference and alleged involvement in illegal mining and later destooled.

“The community members formed groups of miners and were allotted parcels of land, resulting from an MoU the community signed with Xtra Gold Mining Ltd to mine. This irked the traditional authorities who consequently orchestrated the ransacking of their sites and impounding of their equipment with some workers arrested in Rambo fashion. A press conference exposing the dastardly and cowardice actions of the Okyeman taskforce angered the overlord.”

He added: “As part of Corporate Social Responsibility agreement between the community and Xtra Gold, some monies were paid by the miners lodged in a credited account in the name of the community. Asaman-Tamfoe recognising and acknowledging the throne of Ofori Panin gave out GH¢115,000 on 7th October 2022 to the Ofori Panin Fie, disbursement as follows; Abontendomhene GH¢10,000, Osagyefo GH¢100,000.00 [and] Drinks GH¢5,000.”

The Benkumhene, who doubles as the 2018 Best Cocoa Farmer for Atiwa West, says Okyenhene’s destoolment does not hold.

“The Okyenhene broke traditional norm by decreeing that he had destooled me because as Omanhene, he is not a king maker. But in this case, he has now assumed that position hence the numerous chieftaincy issues bedevilling the Akyem Abuakwa Traditional Area.”

He gave explanation to pictures making round of him prostrating before Okyehene.

“I did not prostrate as a sign of remorsefulness or of guilt but as sign of rendering an undeserved reverence because considering the venue of the gathering, any form of resistance and an insistence on not being guilty would not have resulted in any peaceful reactions. I am still the de-facto Benkumhene of Asaman-Tamfoe.”