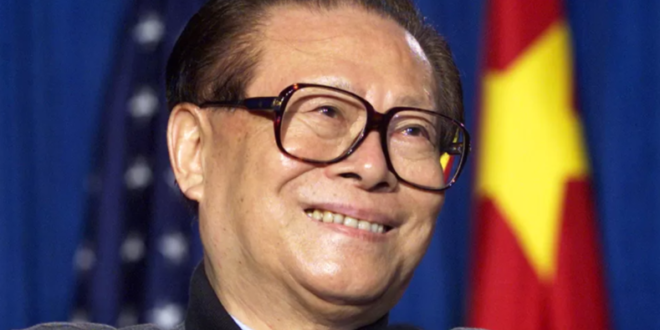 China’s former leader Jiang Zemin, who came to power after the Tiananmen Square protests, has died at 96.

State media said he died just after noon in Shanghai on Wednesday.

One of the major figures of Chinese history in recent decades, he presided over a time where China opened up on a vast scale and saw high-speed growth.

His death comes as China sees some of its most serious protests since Tiananmen, with many demonstrating against Covid restrictions.

It added that he was recognised “as an outstanding leader with high prestige” and “a long-tested Communist fighter”.

Jiang rose to power after the bloody 1989 crackdown on protestors in and around Beijing’s Tiananmen Square, which led to China being ostracised internationally.

The event sparked a bitter power struggle at the top of China’s Communist Party between hard-line reactionaries and reformers.

It led to Jiang, who had originally been seen as a plodding bureaucrat, being elevated to high office. He was chosen as a compromise leader, in the hope he would unify hardliners and more liberal elements.

Under his stewardship, a formidable economy was forged, the Communists tightened their grip on power, and China took its place at the top table of world powers.

He oversaw the peaceful handover of Hong Kong in 1997, and China’s entry into the World Trade Organization in 2001 which intertwined the country with the global economy.

But political reforms were also put to one side and he crushed internal dissent while pursuing a hardline stance on Taiwan. He was criticised for the heavy-handed crackdown on the religious sect Falun Gong in 1999, which was seen as a threat to the Communist Party.

He was also keen to ensure that his position within the Communist Party was secure, and came up with his own political ideology – the Three Represents theory – in an attempt to modernise the party.

During his time in power, Jiang sought to strengthen ties with the US, visiting the country several times and offering then-president George W Bush co-operation in Washington’s “war on terror” following the 9/11 attacks.

In a country not known for its flamboyant leaders, he was seen as having a more colourful personality than his successors. He memorably crooned Elvis Presley at a global summit, and went for a swim off the Hawaiian coast.

In his later years he withdrew from government and was rarely seen in public. But even as he became less conspicuous, online he became an unlikely subject of viral internet memes.