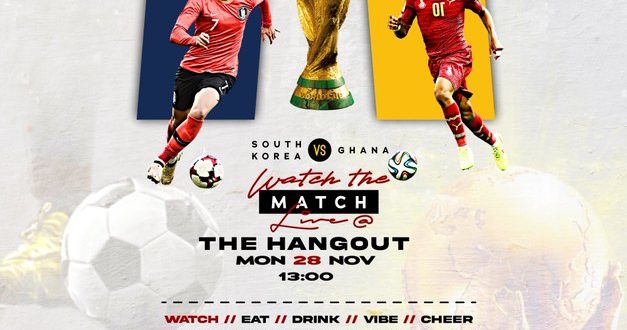 Ghana will look much more hungrier this time as they look to redeem themselves with nothing but a win when they battle out with South Korea in a herculean clash at the Education City Stadium on Monday afternoon.

The Black Stars lost painfully to Portugal in a pulsating five goal thriller in their first game last Thursday- a tie they lost by 3-2 in what they described as a very controversial one.
Captain Andre Ayew snatched his third goal at the World Cup after getting Ghana back on level when marksman Cristiano Ronaldo had already scored from the spot for the opposition.

Jao Felix restored the lead before it was subsequently wrapped up by Rafael Leao, with Red Star Belgrade winger, Osman Bukari getting the other goal for the four time African champions.

See also  Ghana Misses Out On Most Protected African Presidents

On the other hand, having failed to finish as winners of their group in the qualifiers, the Taegeuk Warriors gave a very good account of themselves to hold Uruguay to a goalless draw in their opening game and will anticipate a win this time around to boost their qualification chances.

Ghana came off their last game with no any major Injury or suspension worries in camp and will have a full strength squad for the game.

After an impressive display against Portugal, many Ghanaians have routed for Alidu Seidu for once again to be included in coach Otto Addo’s line up this afternoon.

After recovering late to make their World Cup squad, Heung min Son wasn’t that impressive in their opening game with majority pointing to the fact that he is affected by the Injury but is expected to make the line up.

Wolverhampton Wanderers forward Hee Chan-Hwang who looked like recovering per reports, has been ruled out of the game. However SSC Napoli defender Kim Min-jae is also doubtful for the game.