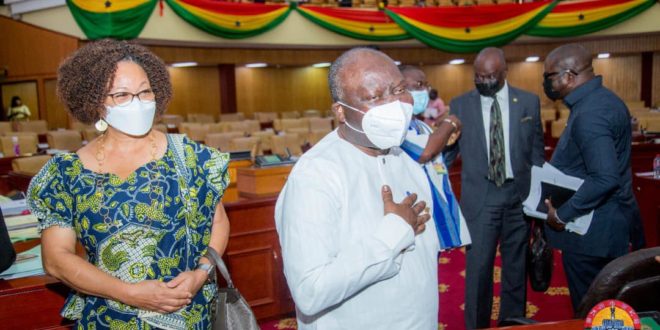 The Parliamentary Committee set up to investigate opposition NDC allegations contained in a censure motion to get Finance Minister, Ken Ofori-Atta, removed from office yesterday laid its findings in the House for consideration.

The committee, which was co-chaired by NPP MP for Adansi-Asokwa, K.T. Hammond, and NDC MP for Bolgatanga East, Dr. Dominic Akuritinga Ayine, examined five grounds (charges), including illegal payments, unethical contracts, misreporting of data, and fiscal recklessness against the minister.

The laying of the report now sets stage for dramatic showdown and the start of what the lawmakers hope will be a high-profile airing of the accusations by proponents and responses by Mr. Ofori-Atta to determine whether the censure motion will survive or not.

The Finance Minister has been criticised for his handling of the Ghanaian economy, with calls for his removal from office, but put up a spirited defence against the raft of criticism during a public hearing on the matter, branding the accusations as unfounded.

“The people of Ghana are enduring hardships. I feel the pain personally, professionally and in my soul,” Ofori-Atta said, prior to his defence and added, the “unfounded doubts about my motives, my competence and my character would have been dispelled.”

Questionable Grounds
The minister questioned all the seven grounds stated for his removal, asserting that the proponents were not thorough enough in their review, which resulted in the striking out of the two of the grounds by the committee.
The charges of “despicable” conflict of interest, and legal payment of oil revenues into offshore accounts in flagrant violation of Article 176 of the 1992 Constitution were struck out by the committee prior to Mr. Ofori-Atta’s testimonies.

“It is therefore unfortunate that in the co-chairs’ estimation of the two grounds that have been struck out, it sounds to me like there was not a thorough review of the grounds as it should have been.

“But to bring somebody for censure, will require these things to be done in absolute thoroughness. I am pleased with the decision that has been made. I am certain that Ghanaians will have a more balanced view of the events that led us here as I take the opportunity to speak to the matters so raised,” the minister stated at the committee’s hearing.

He said the current economic difficulties meant that the nation was being tested, and that the circumstances required a united and concerted response to the crisis.

“I implore our chiefs, elders and church leaders to take the mantle and speak a common language. Let us all work as one country to support our labour negotiation, find the solution to the impasse in Parliament and rise above witch-hunting and entrapment,” he stressed.

Cathedral
Responding to the allegations, the minister denied breaching the constitution in making payments to support the construction of the National Cathedral of Ghana.

“I want to say that this is not just true. I have not taken money out of the Contingency Fund to make payments for the National Cathedral,” he insisted and said that accusation that he unconstitutionally withdrew from the Consolidated Fund in “blatant contravention of Article 178 of the Constitution supposedly for the construction of the President’s Cathedral.”

“That took me for a loop. I did not know what the President’s cathedral was. Let me first submit that I am uncomfortable about the formulation of this ground.

“It presupposes that Parliament is assuming the jurisdiction to enforce and interpret a provision of the Constitution against combined effect of Articles 21 and 130 (1) which grant the sole and exclusive power to the Supreme Court,” he contended.

“The Contingency Fund is what is covered under the Constitution (Article 177). This constituted money voted by Parliament and advances from this must be authorised by the parliamentary Finance Committee,” he explained.

He continued, “The Contingency Vault, on the other hand, is aligned under the government’s obligation vault which is approved by the Finance Committee and is passed as part of the annual Appropriation Act passed by Parliament.”

The minister asserted that in preparing the annual budget, the practice is that provision is made for indicative expenditures that have not been fully costed at the time of the budget presentation.

“Provisions are made in the Contingency Vault to cater for such expenditures. For example, in 2014, there was no specific allocation in the 2014 budget for Ghana’s participation in the FIFA World Cup in Brazil.

“The cabinet of President Mahama in March 2014 at the time approved some $9.622 million for that tournament, including that amount which was just flown to Brazil in a private jet for the players,” he stated.

He emphasised, “All the payments made for the National Cathedral were lawfully done and from the contingency vault under the other government obligations vault and not from the Contingency Fund, as alleged by the proponents.”

On the issue of deliberate misreporting of economic data to Parliament, the minister described the accusation as not only unfortunate, but also “simply untrue and for that matter the Ministry of Finance never misreported to Parliament as has been alleged.”

“That allegation that different sets of data were presented to Parliament and the IMF is not true.

“The 2019 Article 4 which they cited actually and clearly demonstrates the computing and reporting of the deficit is consistent between the government and the IMF as shown on the table labeled Ghana Selected Economic and Financial Indicator from 2017 to 2024 on page 4 of the IMF Article 4 and Appendix III (A) in the 2019 budget,” he explained.