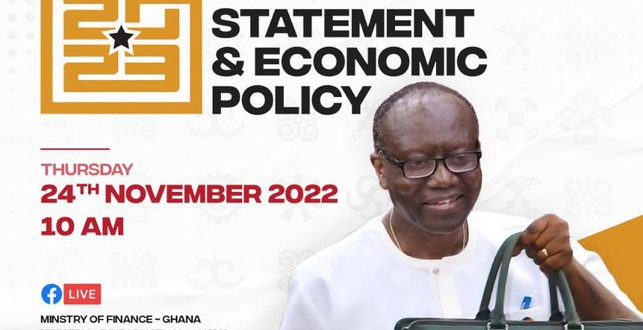 The Minister of Finance, Mr. Ken Ofori-Atta, will present the budget statement and economic policy of government for the year 2023 to Parliament today, 24th November, 2022.

Confirming the development while presenting the business statement for the week, Majority Chief Whip and MP for Nsawam-Adoagyiri, Frank Annoh-Dompreh, urged Members of Parliament to report for the constitutional exercise.

He noted that the debate on the budget is scheduled to commence on Tuesday, November 29, 2022.

“The Business Committee looks forward to a lively, well-researched, and informed debate on the economic policy of the government for the year 2023,” he said.

Commenting on the structure for the debate, Annoh-Dompreh said the Business Committee had proposed that the debate focused on sector-specific areas to give clarity to the debate.

“The areas of the debate would include security and public safety, finance and the economy generally, energy and other infrastructural sectors, the social sector, local governance as well as youth, sports, tourism and culture.”

“The recommendation is to ensure coherence, comprehensiveness and logical flow of the debate,” he stated.

The presentation of the budget comes at a time when the minister is facing opposition to his continued stay in office, both from the governing New Patriotic Party and the National Democratic Congress caucuses in Parliament.

Meanwhile, the Finance Minister, Ken Ofori Atta, is facing the Adhoc Committee of Parliament hearing the censure motion brought against him.

The Minority Caucus filed a censure motion to force the Minister from office on seven grounds including incompetence, illegal withdrawal from the consolidated fund and deliberate and dishonest misreporting of economic data to Parliament.