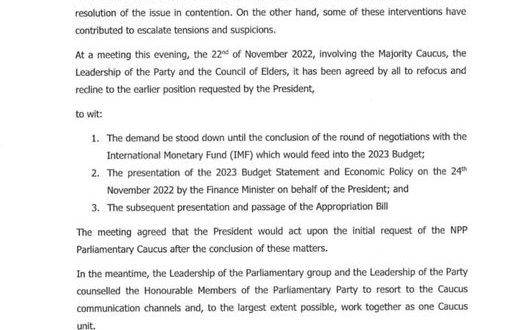 The New Patriotic Party Caucus in Parliament have been urged by the Party’s executives to stand down on their demand for the removal of the Finance Minister, Ken Ofori-Atta, till after the 2023 Budget statement is read and appropriated.

This follows a meeting with the Caucus on November 22 to find an amicable resolution to the impasse in the NPP Parliamentary group.

Some 98 NPP MPs have been demanding the immediate removal of the Finance Minister accusing him of economic mismanagement.

While a meeting with the President had calmed tempers, a motion of censure filed by the Minority against the Minister had reignited calls for the Minister’s removal.

According to the NPP communique signed by the Majority Chief Whip, Frank Annoh-Dompreh, and the NPP General Secretary, Justin Kodua Frimpong, the Party has resolved that the President will act on the earlier demands of the MPs after the 2023 budget has been read and appropriated.

It concluded that, Members are to attend to all government business in the house, particularly, the 2023 Budget Statement and Economic Policy and all related matters.