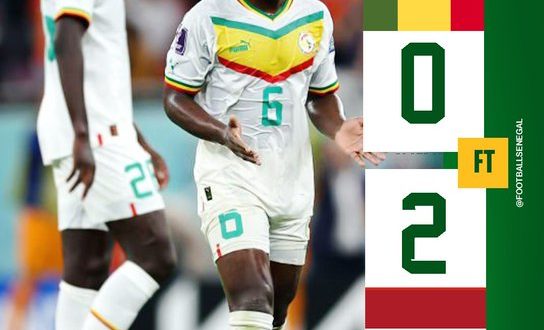 Two second half late goals from Cody Gakpo and Davy Klaassen ensured Netherlands to begin their 2022 FIFA World Cup campaign with a victory over Senegal at the Al Thumama Stadium.

Netherlands inflicted a painful 2-0 defeat on the reigning Africa champions in the second Group A game on Monday evening.

The Teranga Lions of Senegal commenced the fixture on a good note with a brilliant display to enjoy possession in the early minutes of the game.

Duo Ismaila Sarr and Boulaye Dia poised as threats to the defense of the Dutch with some bullets strikes but their efforts went wide.

Netherlands warmed themselves into the game after the Senegalese had threaten them with some fearsome attacks of opening the score before the first quarter of the game.

PSV Eindhoven star Cody Gakpo delivered a descent cross into the box of the Senegalese but his teammates failed to make a touch of it as Pape Abou Cisse calmly cleared it.

On the 25th minute, Ismaila Sarr kept tormenting the Netherlands defense with another fine drive from the edge of the box but a timely header from Van Dijk denied him from causing any havoc.

The remaining minutes of the first looked balanced as both sides tried their lucks with audacious strikes but none of them could produce the opener as it ended in a scoreless draw for the first 45 minutes.

Back from the recess, Senegal were forced to make substitution following the injuries picked up by Abdou Diallo and Cheikhou Kouyate after the hour-mark. Both players were replaced by Ismail Jakobs and Pape Gueye.

Goalkeeper Andries Noppert made a sparkling save to deny Boulaye Dia from opening the score on the 65th minute after a Senegal’s golden opportunity of the second half fell for him.

Noppert made another save to deny Idrissa Gueye from scoring with a snap shot from a mid-range on the 73rd minute after the Senegalese had gained possession to mount pressure on the Oranjes.

Gakpo opened the score with a brilliant header from a lofted cross delivered into the box of Senegal by Barcelona star Frankie De Jong on the 84th minute.

Three minutes later, Senegal came close to respond quickly through Pape Gueye with a strike from the edge of the box towards the bottom right corner, but Andries Noppert makes a terrific save to deny him.

Ajax midfielder Davy Klaassen sealed the victory for the three-time World Cup finalists with his strike on the 99th minute of the game.

On Sunday, Ecuador outclassed host nation, Qatar after recording a 2-0 win courtesy a first half double from Enner Valencia.