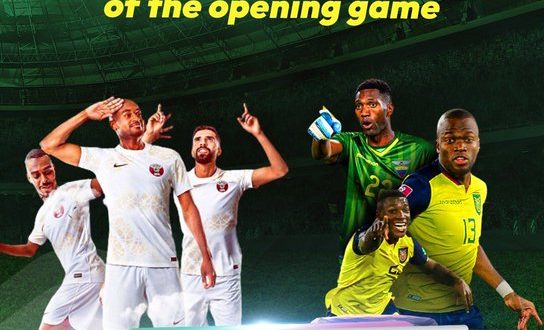 The 2022 FIFA World Cup finally takes place in Qatar after four months extension from the usual period, due to weather conditions in the host country, with heat in the summer very unbearable

The Mundial returns on Asian soil after 20 years, when it was co-hosted by Japan and South Korea in a tourney which saw lots of iconic moments.

Host nation, Qatar will battle it out with Ecuador in what pledges to be a crunchy opening game at the Al Bayt Stadium in Al Khor.

The Maroons definitely after the highly anticipated opening ceremony, will definitely have their sights set on grinding their first ever World Cup win to send the home fans in a cacophonic joy.

The Tricolors on the other hand, will also approach this game seeking for their fifth win at the World Cup finals, and also win their opening group game for the second time after the first- when they humbled Poland 2-0 in the 2006 in Germany

Spanish gaffer Felix Sanchez and his men didn’t partake in the qualifiers series but never stayed unengaged after playing some friendly matches within that period to gel well for the biggest competition.

They have just a win in their last five matches and astonishingly it happened against Ghana’s home-based national team back in August, and just recently held two time South American champions Chile in September.

On the opposition end, Ecuador secured their fourth World Cup berth after excelling in the qualifiers with an impressive drawn games against the top two, Brazil and Argentina and also grinded five victories in addition, pushing them to the 44th position in the last FIFA ranking.

Gustavo Alfaro’s lads are unbeaten in their last six matches, claiming two wins and impressively avoided loses against both Mexico and Japan.

Qatar have the blend of the youthful exuberance and experience at their disposal since Abdelkarim Hassan and Al Haydos are still in the squad, with the two boasting of 130 and 169 international appearances respectively.

Al Sadd’s Akram Afif is one of the most promising footballers the country has produced and there will definitely be eyes on him to be their conjurer from the left flanks.

Also, the Yellows comes in with their all time leading scorer Ena Valencia who will captain them this time and will hope to surpass Augustine Delgado as their player with the most goals at the Mundial as they currently on three goals each.

Much will also be expected from the Premier League duo of Moises Caicedo and Pervis Estupinan- all at the AMEX with Brighton.

Both teams have a win each with one drawn game after three meetings, with Qatar winning their last encounter- a seven-goal thriller which happened in 2018.