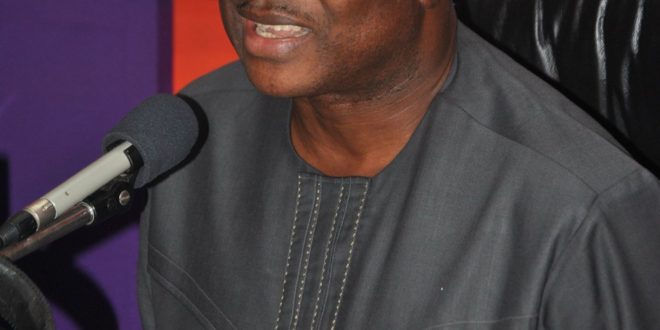 Mr. Kojo Bonsu, the former Kumasi Metropolitan Assemble Mayor, has this morning reignited the fire and zeal in members and sympathizers of the National Democratic Congress (NDC) as he assured them of splitting the political fortunes within the Ashanti Region among the NDC and NPP.

He gave this refreshing assurance on Angel Tv/FM’s flagship morning show “Anopa B)fo)” with Nana Yaa Brefo and her co-hosts.
The former Kumasi Mayor said he is currently the only person who has the capacity to break the long held perception that Ashanti Region is solely the comfort zone of the NPP.

“A lot of people still hold the view that Ashanti Region is only for the NPP party but I say it is false. NDC can break that record and I, Kojo Bonsu is the only person who can divide the votes in the Ashanti Region for the NDC to get the maximum needed votes to win the 2024 elections. That is why I am working on what I call the agenda 50/50, “Ky3 Mu p3″ where we the NDC take 50% of the votes in Ashanti Region and the other 50% for the NPP and I am the only person who can lead the NDC to acheive this feat”, he assured.

When asked if he will still pursue his agenda 50/50 should the NDC vote for a different presidential candidate, the former National Sports Authority (NSA) boss said his agenda still remains regardless of the outcome of the elections. Mr Bonsu is convinced the delegates would endorse him however in the unlikely event that the endorsement goes to another person, he will still stand firmly behind the chosen candidate, mobilize his base and rally the support of all to accomplish his mission of dividing the Ashanti region votes for the sake of victory in 2024.
“I am very convinced the NDC will choose me as the next presidential candidate because the reality of the need for change is a fact known and accepted by the majority of Ghanaians today and my beloved party, the NDC should have learnt many painful but important lessons from the eight years we have endured in opposition to make the right decisions that can change the party’s destiny.  Even in the unlikely event that it goes to another candidate, I will support that party member and make sure that we divide the Ashanti region votes by half to win the 2024 general elections”. He added.

Responding to a question on whether or not he would accept a running mate slot from anyone else who wins the NDC race, he said “that time has not come yet. In planning to take power from the NPP or any party for that matter, you must plan well and excite flawlessly. At this juncture we are working towards the priority objective which is to lead the party however if by the end of this year we find ourselves in such a situation as you describe then the bottom line would be my willingness to serve the party in any capacity required and I have always made that clear not only in words but in deed” he explained.

Mr. Kojo Bonsu, is one of the few individuals in the NDC party who has hinted strongly of his intention to contest the party’s presidential candidate position when the official nomination process begins.  In line with his innovative and passionate spirit he has since last year led the call for the reorganization of the party, popularly dubbed “Reboot for Victory” to energize the party’s base to secure victory in 2024 for All Ghanaians.