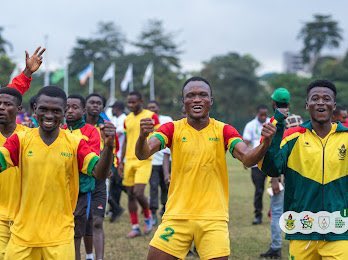 Kwame Nkrumah University of Science and Technology (KNUST) climaxed the 27th Ghana Universities Sports Association (GUSA) games by winning their first-ever silverware in the male football competition.
KNUST extended their unbeaten streak in the competition after sharing spoils with University of Ghana (UG, Legon) in the grand finale at the Paa Joe Park on Friday afternoon.

And University of Education, Winneba is the official winner of GUSA Games 2022.

A 68th minute strike from Paul Attah Yeboah forced the crunchy clash into a penalty shootouts which KNUST emerged victors.

KNUST commenced the game on a good note with an intense pressure on the male football team of University of Ghana to open the score in the early minutes of the game.

Talented midfielder Daniel Asiedu brilliantly snatched the opener for the KNUST with an audacious strike on the 8th minute of the game.

The CHAMPIONS of the MEN’S FOOTBALL of the 27th GUSA GAMES, KNUST 2022 is The Kwame Nkrumah University of Science and Technology KNUST! Wow what a TOP UNIVERSITY
They won the gold medal in football for both men and women#GUSAKNUST2022 #TheHubMedia pic.twitter.com/SrX6mxG5yo

KNUST looked dangerous upfront after taking the lead in the early as they enjoyed majority of the game possession. Despite enjoying the possession with a five-star performance, they couldn’t extend their lead with the numerous chances and set-pieces awarded to them.

The first stanza of the game ended in a 1-0 win for the Kwame Nkrumah University of Science and Technology (KNUST).

In the second half, University of Ghana warmed themselves into the game with a different style of play which eventually paid off with the leveller after the hour-mark.

Winger Paul Attah Yeboah made good use of a defensive error from the backline of KNUST to grab the equalizer on the 68th minute of the game.

University of Ghana dominated the second half of the game with some fearsome attacks launched by Desmond Delle and Kojo Dadson.

Despite dominating the remaining minutes of the game, University of Ghana failed to make their goal glaring opportunities count as the fixture ended in a 1-1 draw.

KNUST goalkeeper Vincent Osei was the hero during the penalty shootouts after saving two spot-kicks to aid his side to lift the prestigious trophy 5-4 on penalties.

Before the game, the KNUST women football team defeated University of Development Studies (UDS) 1-0 in the Women’s Football final to seal their host-and-win target.

Previous NDC National Chairman: I Have Been To Court 70 Times Because My Party Folks Leaked A Private Discussion To NPP
Next Divisions In NPP Could Pose Political Risk – Fitch Solutions Predict