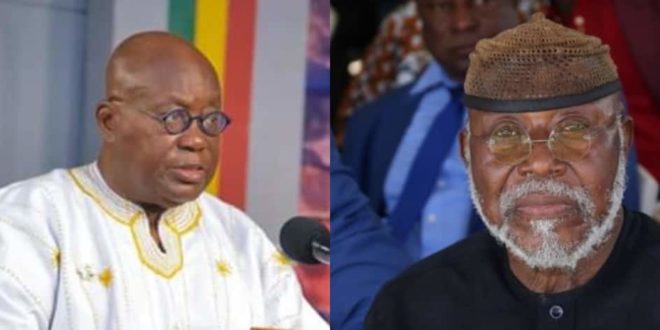 A founding member of the New Patriotic Party (NPP), Dr. Nyaho Nyaho-Tamakoe has declared Ghana as a failed nation.

According to the statesman, the mismanagement of the economy by the Akufo-Addo government has sent all achievements chalked by previous governments downhill.

He made these assertions in an interview on JoyNews’ AM Show on Wednesday.

“I was asked this question some time ago. I said, for having been able to handle this country at least for four years at that time, now we are in the sixth year, I will give them 4 out of 10, at that time. Now I’ll go lower, 2 out of 10.

“It is a fail! In fact, we are a failed state. This nation is now a failed nation. People do what they like. We have a nation that the people don’t respect the laws,” he said on Wednesday.

Dr. Nyaho – Tamakloe alluded to other contributing factors to the “failed nation” status Ghana has attained

Amongst these factors, he cited the failure of the Special Prosecutor, so far, to disclose the identity of the unnamed businessman who is said to have influenced the decision of the Majority MPs to change their stance regarding the resignation of the Finance Minister, Mr. Ken Ofori-Atta.

The statesman emphasised that if one wealthy man can influence a whole Majority in Parliament, then Ghana indeed, is a failed nation.

Ghana’s economy has been on a downward trajectory, which has generated anger among the populace.

A large segment of the public is calling for heads to roll as a result of what is termed as economic mismanagement and corruption on the part of government and party officials.

Ghanaians on some occasions have taken to the streets to drum home their displeasure on the state of the economy.

Meanwhile, President Akufo-Addo has assured the citizenry that measures are being taken to mitigate the high cost of living.

Addressing the nation on the state of the country’s economy, the President admitted that the nation is in crisis and called for a united front in resuscitating it.