Breaking News
Home / National News / Who Do You Think You Are? – Majority Leader Queries Gabby Otchere-Darko 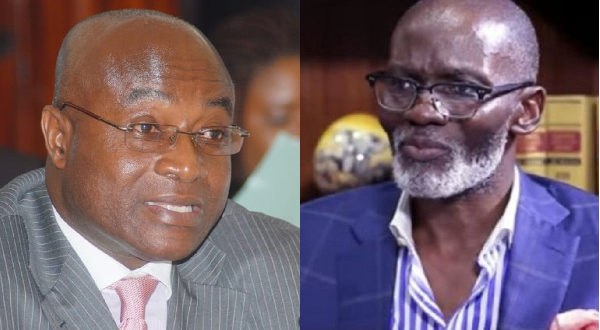 Who Do You Think You Are? – Majority Leader Queries Gabby Otchere-Darko

The Majority Leader has expressed his disappointment at Mr Gabby Asare Otchere-Darko, a leading member of the ruling New Patriotic Party (NPP).

Mr Osei Kyei-Mensah-Bonsu says Mr Asare Otchere-Darko has made some unfounded allegations against him.

According to the Suame lawmaker, he has been accused of instigating the calls by some members of his caucus for the removal of the Finance Minister.

However, the Minister for Parliamentary Affairs has denied the accusations.

“From nowhere, we hear Gabby Otchere-Darko on his Asaase Radio accusing me of instigating what was happening, for what? What do I stand to gain from that?”

After the denial, the Majority Leader subsequently questioned the authority of his alleged accuser in the scheme of things in the government.

“There are people who would rather want to cause disintegration while you are committed to integrating. But now this has brought about another sense of anger.

That Gabby Otchere-Darko, who does he think he is? I serve Akufo-Addo, and I serve the party as well as the government… when we talk about the government itself, what is your locus standi to be accusing me of being an instigator?,” he queried in an interview on a Kumasi-based Sompa Radio over the weekend.

According to them, the continuous stay of Ken Ofori-Atta in office is delaying the IMF bailout the country is seeking due to the fact that the Minister has lost all credibility.

They had thus petitioned the President to either remove him or face a boycott in Parliament.

“If our request is not responded to positively, we will not be present for the budget hearing, neither will we participate in the debate,” Mr Andy Appiah-Kubi, spokesperson for the Majority Caucus and MP for Asante-Akim North Constituency indicated.

Subsequently, in a JoyNews interview, the Majority Leader said the entire caucus was in alignment for the call for the embattled Finance Minister’s removal.

“Even though the issue started with the group of 80 plus, the caucus meeting aligned with the position of that group, so it is no longer the cause of the 80 plus MPs.

See also  Akufo-Addo: Pray And Keep Faith In Us; We Will Turn Things Around

It is the agenda for the entire caucus and we are having some discussions on that,” he said.