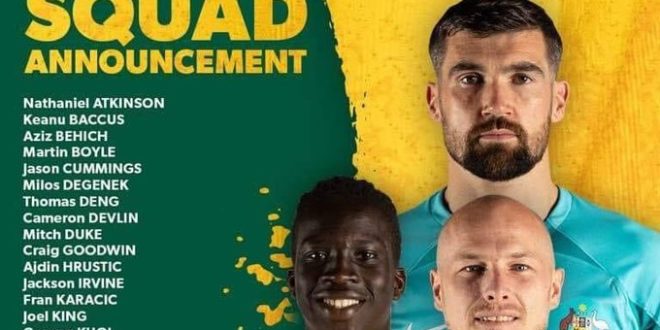 Goalkeeper Mathew Ryan and winger Mathew Leckie were picked for a third World Cup, with Ryan leading the squad in Qatar.

Kuol, who was born in Egypt to Sudanese parents and moved to Australia as a child, scored four goals in his first seven appearances off the bench for the Central Coast Mariners in Australia’s A-League. He is likely to join Newcastle in the Premier League next year.

“The make-up of our team reflects Australia’s multicultural landscape. Our boys come from all over the world, they all have different journeys, but we are united by one jersey,” Arnold said. “We have worked hard to give younger players an opportunity over the (qualifying) campaign, to expose them to international football, to test them against the best and I’m thrilled with the development and maturity of this group who now get a chance on the biggest stage possible.”

Arnold said 32 players had made a debut for Australia over the last four years and 68 players were picked for national duties in that time, with the bulk of World Cup qualifying games played away from home because of travel restrictions in place in Australia during the COVID-19 pandemic.

Australia clinched its spot at a fifth consecutive World Cup after back-to-back knockout wins, beating the United Arab Emirates in an Asian playoff before edging Peru on penalties in the intercontinental playoff.

“It’s been a unique and difficult qualification campaign,” Arnold said, “and we now arrive in Qatar with an exciting squad.”

The 34-year-old Langerak had been coaxed out of international retirement this year and given more shot at representing the Socceroos but, despite being a standout for Nagoya Grampus in Japan, lost his place in the squad to Australian-based Danny Vukovic.

Australia kicks off is Group D campaign against defending champion France on Nov. 22.

See also  World Cup: Dr Narteh-Ogum, Samuel Boadu And Others To Travel With Black Stars To Qatar On Working Attachment 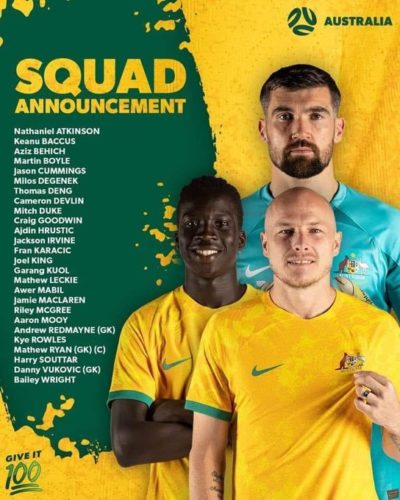