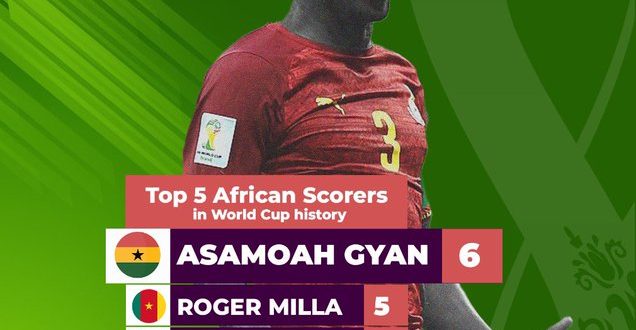 Since participating in their first FIFA World Cup in Germany in 2006, the Ghana Black Stars have proven they have what it takes to succeed on a big stage.

The Black Stars will attempt to rekindle the spark they created in 2006 and South Africa in 2010 as they enter their fourth World Cup competition.

The West Africans will be eager to get back into action when they make their return in Qatar after failing to qualify for the 2018 edition in Russia.

Ghana, the team with the lowest ranking entering the 2022 tournament, will face Portugal, Uruguay, and South Korea in Group H.

Ghana’s history at the World Cup may be brief but is by no means inconsequential as the West Africans have firmly secured their place among the top football nations on the planet.

While Ghana officially made their debut at the global spectacle in Germany in 2006, one can only speculate whether they could have reached the World Cup earlier if it was not for a continent-wide boycott of the 1966 edition.

A 1964 FIFA ruling required the winners of the African and Asia/Oceania zones to compete for the only remaining spot for the World Cup, which ultimately led to a Ghana-led boycott of the tournament. In contrast, Europe had 10 of the 16 available slots, with South America receiving four and North America one. African nations had argued for a separate qualification slot and for the tournament to be expanded.

During that time, Ghana would have been considered among the favourites after winning consecutive Africa Cup of Nations titles in 1963 and 1965.

The boycott led to the expansion of future tournaments, which saw the return of an African nation in tournaments in the 1970s.

Ghana had to wait until 2006 to finally get a run at the World Cup, where they reached the round of 16. The Black Stars stepped up a gear four years later in South Africa, where they became only the third African nation to reach the quarterfinals at a World Cup.

Ghana: Black Stars’ World Cup results
The Ghanaians had a baptism of fire in their opening match at the 2006 showpiece, where they suffered a 2-0 defeat to eventual champions Italy.

They bounced back with aplomb in their second game, producing one of the tournament’s biggest upsets, defeating world number two, the Czech Republic, 2-0, courtesy of goals by Asamoah Gyan and Sulley Muntari.

Ghana beat the United States 2-1 to reach the round of 16, where they bowed the knee to defending champions Brazil (3-0), finishing the tournament 13th overall.

Buoyed by their stunning debut, the West Africans safely navigated their way past the group stages in South Africa 2010, where they met the U.S in the next round. Ghana again had the Americans’ number, with Gyan breaking the 1-1 deadlock in extra time for a historic victory.

Their quarter-final clash against Uruguay delivered one of the most dramatic moments of the tournament. Uruguay’s Luis Suarez was sent off for a deliberate handball in extra time, giving Ghana a shot at sealing the victory and a place in the semi-finals. Gyan’s penalty hit the crossbar, with Uruguay snatching victory from the jaws of defeat on penalties.

Ghana reached their third World Cup in Brazil in 2014 but could not reach the same lofty heights of their first two tournaments, crashing out in the group stages. The only silver lining was holding eventual champions Germany to a 2-2 draw.

Ghana: World Cup records
The Black Stars have made an instant impact since they first appeared at the FIFA World Cup. They were the only African nation to reach the second round of the tournament in 2006, while they also fielded the youngest team in Germany.

By reaching the quarterfinals four years later, Ghana joined an exclusive club from the continent – which includes Senegal (2002) and Cameroon (1990) – to finish among the top-eight teams at the quadrennial football spectacle.

Asamoah Gyan became the leading African goal scorer in his side’s 2-1 defeat to Portugal in Brazil 2014, where he extended his tally to six goals. Gyan scored his first in Ghana’s historic victory over the Czech Republic in 2006 before adding three more in South Africa.

They reached a high of seventh place at the South Africa 2010 World Cup and slipped to a low of 25th four years later in Brazil, where they were knocked in the first round of matches.

Ghana: Top Black Stars players at World Cups
The young crop of players that spearheaded Ghana’s charge at the country’s first World Cup in 2006 laid the groundwork for the team’s success in South Africa 2010.

The likes of Asamoah Gyan, Stephen Appiah and Sulley Muntari have played leading roles in the country’s campaigns across the three World Cups. Gyan and Muntari have represented Ghana at all three tournaments.

Appiah led the charge as the team’s captain in 2006 and was a vital squad member at the 2010 showpiece.

Current captain André Ayew, the son of Ghanaian legend Abedi Pele, has been an equally influential player for Ghana and is expected to reach his third World Cup in Qatar. Ayew recently equalled the record of 109 appearances held by Gyan.

The 32-year-old Ayew has been a mainstay of the Ghanaian team since making his World Cup debut in South Africa in 2010. He was named the second-best young player in that tournament and also made an impact for Ghana four years later in Brazil in 2014.