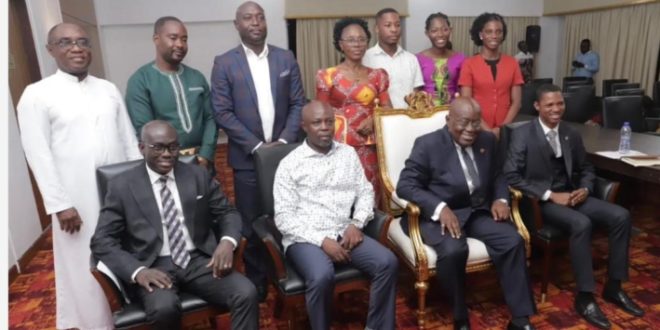 The President of the Republic, Nana Addo Dankwa Akufo-Addo, has pledged support to the Two Private Member’s Bills initiated by Madina MP, Francis-Xavier Sosu to substitute Life Imprisonment for Death Penalty under the Criminal Offences Act 1960, (Act 29), and the Armed Forces Act, 1962 (Act 1962).

This was during a courtesy call by Amnesty International Ghana to the President of the Republic to bring him up to speed on the progress made so far toward the outlaw of the death penalty.

Over the years, the right to life has been a fundamental human right. However, capital punishment remains a legal penalty in Ghana.

The latest statistics from the Ghana Prisons Service show that there are 171 convicted persons currently under death sentence. Although Ghana is currently classified as an ‘abolitionist de facto’, the term given by the UN for a state that has not carried out an execution for over 10 years, with last executions carried out in 1993, the methods of executions of persons sentenced to death globally comprise of beheading, electrocution, hanging, lethal injection, and shooting. At the end of 2021, at least 28,670 people were known to be under death sentence.

In his address when Amnesty International called on the Presidency, Francis-Xavier Sosu, who also doubles as Deputy Ranking Member of the Constitutional, Legal, and Parliamentary Affairs Committee of Parliament. urged the President to support the bills which will achieve about 95% abolition of the death penalty.

He said “Even though in the last 30 years Ghana has not executed anyone, it is a matter of fact that those in condemned cells are not treated as the same as those who are in life imprisonment.

The right to self-dignity and not to be subjected to torture or degrading treatment is violated in respect of persons on death roles, who are kept in condemned cells with limited access to light and not executed.

The President in his address acknowledged that indeed though Ghana has not enforced the death penalty, it still retains it on its statute books. He noted that the continued stay of the death penalty on the statute books went against moral values, and devalued lives, rights and dignity of persons.

The President further added that although Ghana had made a conscious effort not to invoke the death penalty on persons who had been sentenced to death, the state must “do the logical thing” by obliterating it from her statute books. He stated “The time to abolish death penalty is now. However, in the meantime, we can in a cross-party cooperation ensure the passage of the two private members’ bills submitted to Parliament by Mr Sosu while we take steps to completely abolish the death penalty.”

On his part, the Attorney General, Godfred Dame said “Your Excellency, yes, it is true that we can amend these acts to replace the death penalty with life imprisonment without a constitutional amendment.”

It will be recalled that in January 2010, the Constitutional Review Commission, a presidential Commission of Inquiry, set up to consult with the people of Ghana on the operation of the 1992 Constitution and on any changes that needed to be made to the Constitution in paragraph 75 on page 645 of its final report stated “The Commission recommends the replacement of the death penalty with imprisonment for life without parole.”

“The sanctity of life is a value so much engrained in the Ghanaian social psyche that it cannot be gambled away with judicial uncertainties”.

Recently, Supreme Court nominees, Justice Samuel Kwame Adibu Asiedu and Justice Barbara Frances Ackah-Yensu, justices of the Court of Appeal, both advocated abolition of the death penalty during their vetting by the Appointments Committee.

In recent times, punishment the world over has moved from retribution to reformative punishment. There are also several examples of persons who were convicted and sentenced to death, who later were found not to be guilty of the offences for which they were convicted.

This begs asking the very critical question of whether or not persons must continuously be sentenced to death. If the two Bills introduced by the Madina MP are passed, Ghana will become the 26th African country to abolish the death penalty for ordinary offences, following neighbours including Sierra Leone, Zambia, Central Africa Republic, Guinea, Benin, Cote d’Ivoire, Senegal, Togo, Chad, and Equatorial Guinea, among others.