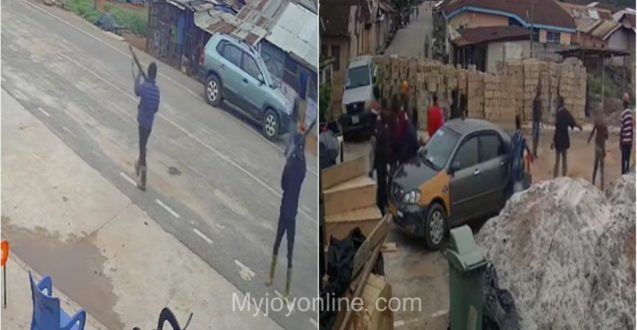 Barely a day after police commenced an investigation into a chieftaincy dispute in Enchi, video footage has emerged.

The CCTV clips detail how the suspected attackers besieged the palace on Sunday in the Western North Region.

That morning, four people were shot dead with one left in critical condition at Enchi Government Hospital.

According to the report, the incident was evoked when an unidentified group believed to be residents of the community attempted to attack their paramount chief of Enchi Traditional council, Beyeeman Tano Kwao Benbuin II at his palace on early Sunday, November 6, 2022.

However, the palace guards also avenged and there was an exchange of gunfire between the two parties.

Four of the visitors were killed and one person was also injured.

In the video obtained, about a dozen men are seen bullying their way through the streets of Enchi armed with guns, knives and other assault weapons.

At a point, two of them stopped and fired shots into the air before proceeding toward the palace.

According to Adom News’ Augustine Boah, security has been strengthened in and around the palace today.

He however indicates that there is an uneasy calm despite the police presence.

The Ghana Police Service says an investigation is ongoing with crime scene experts deployed on site.

The police in a statement say reinforcement teams have been dispatched from the national headquarters in Accra and surrounding police regions to support the Western North Regional Police Command. 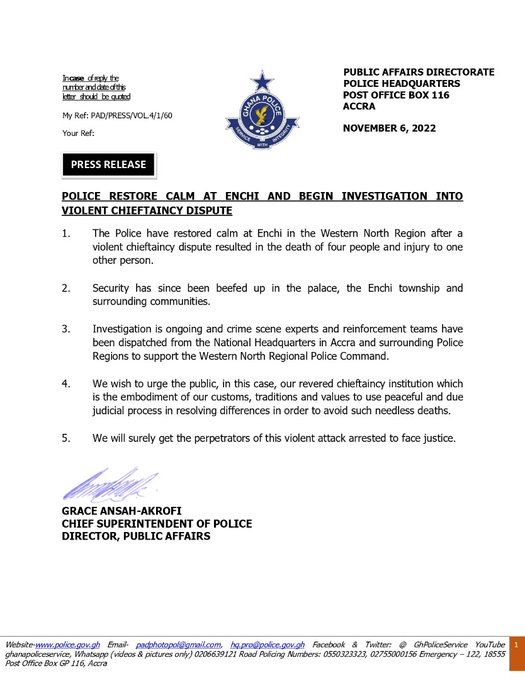 They also urged “the public, in this case, our revered chieftaincy institution which is the embodiment of our customs, traditions and values to use peaceful and due judicial process in resolving differences in order to avoid such needless deaths.”