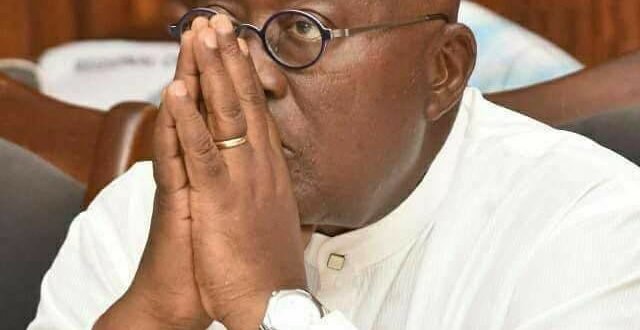 Ghanaians Are Suffering; Mr. President, Where Are Your Men? – Patriotic Front Movement

Members of the Patriotic Front Movement of Ghana has called on President Nana Addo Dankwa Akufo-Addo to evaluate, and reshuffle his ministers to ensure his vision for the country is achieved without any hindrance.

According to a statement issued by their president , They are very disappointed with happenings within of this government.

Mr. Mr Nyamekye Ebenezer, President of Patriotic Front Movement of Ghana  stated that reshuffles are an opportunity to promote high-performing ministers by moving them into positions of greater responsibility, and to remove those not doing well in an attempt to improve performance.

The unedited statement below

MR. PRESIDENT, WHERE ARE YOUR MEN? WE ARE SUFFERING.

“The one with ears to hear should listen and understand that government is of the people, by the people and for the people.”  In other expression, If there are no people in the country there would be no government.

I Nyamekye Ebenezer, President of PAFMOG, a social activist and as a concerned citizen of our country feel very uncomfortable of the current happenings under the watch of H.E Nana Addo Dankwa Akuffo Addo.

I would like to state emphatically that, the current happenings in the country is a serious national security threat and the President needs to sit up and do a proper reshuffling as soon as possible.

If I cast my mind back to recall the umpteen number of promises the president made to the electorates during the time that he was desiring to ascend to the throne of presidency, few have been implemented with the many still remaining as a nightmare and a mirage.

Nana, where are you and your minions (supporters)? Mother Ghana is crying with a stentorian voice to pull her from the numerous unpleasant issues that have chained her to stagnation. Every now and then, the murmurings and complainings keep on rising without being attended to in a positive way for national development.

The government thinks that, it is doing its maximum best but l can tell you confidently in the face that, it is becoming the poorest administration ever in the history of Ghana after independence. It can boast of the “Free Senior High School” policy, but, I  tell you, It is in shambles and has produced graduants who are comparatively unknowledgeable and perform academically bad as evidenced from their record from the various universities in Ghana.

This and among many other issues such as the following have become a painful headache to the entire populace of Ghana.
# Planting for food and job
# NABCO
# NSS allowance
# School feeding
# One district one factory
# Incessant increments in fuel prices with its attendant high cost of living.

I think If the above government policies have been addressed tactically, Ghana would have been positioned on a pedestal of excellence and be a shinning examples to other African countries.

It is extremely overwhelming to see that after independence, some part of Ghana and its environs still experience a deluge of flood that sweeps away people’s belongings, destroys their assets and  endangers biodiversity. All these are attributive to poor administerial skill  of which I believed could be corrected If the president has the support of able ministers who are reliable and trustworthy. I humbly suggest to H.E Nana Addo to make immediate reshuffling to the below ministerial positions because per my perspective, occupants of these position have failed the country as a result of their non-perfomance.

Finance ministry Water and Sanitation ministry Agriculture ministry Interior ministry Road and highway ministry Gender and Children ministry
Nana, let us know the true manifestation of your words: ” we have the men and women who will give this country a first class government and return Ghana to the path of progress and prosperity” on tweet, 04 October, 2016.