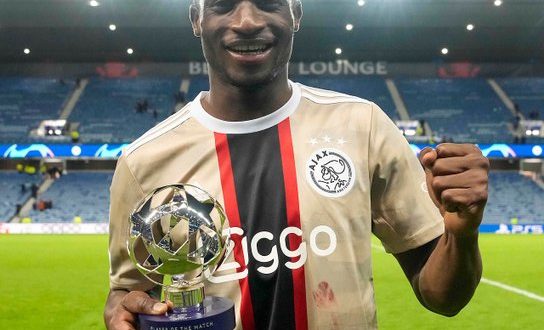 Ghanaian international Kudus Mohammed was adjudged man of the match in their emphatic 1-3 away triumph over Rangers at the Ibrox Stadium.

He had a fantastic game and was involved in two goals on the night, having scored and assisted and also had one of his goals ruled out by the Video Assistant Replay (VAR).

On the 4th minute, Steven Bergwijn brilliantly slotted in a pass from Kudus Mohammed to hand Ajax the opener.

Mohammed doubled the lead for the Dutch Eredivisie champions with a fine strike on the 29th minute of the game.

In the second half, the Ghana international scored once again but it was ruled off by the Video Assistant Referee (VAR).

Rangers reduced the deficit through a penalty kick was converted by James Tavernier on the 87th minute but Chico Conceicao found the back of the net for the visitors two minutes later to finish the match in a 3-1 win for Ajax.

The Jews despite the win will drop into the Europa League after finishing third on the log with 6 points.

Mohammed Kudus has now contributed to six goals in the Champions League for Ajax this season, all as a false 9.🇬🇭🌟 pic.twitter.com/uoIx9aEmCa

Loved the assist by 🇬🇭 Mohammed Kudus tonight. The Ghanaian showed good technique by turning 180 degrees after receiving a low cross before laying off a perfectly weighted pass – all in one motion to set up Steven Berghuis for the opener vs Rangers. pic.twitter.com/2YzgTVsCsA

A goal and assist now for Mohammed Kudus 🇬🇭 against Rangers.#CitiSports pic.twitter.com/ACIt8fHoXU