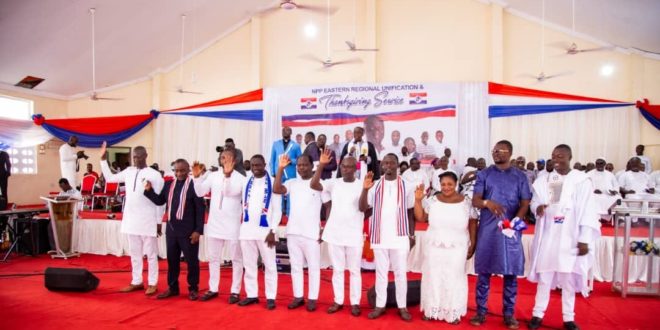 The Eastern Regional branch of the ruling New Patriotic Party (NPP) on Sunday, 5th June, 2022 held a unification and interdenominational Thanksgiving Service to exalt the Lord for His mercies that resulted in a successful regional  delegates conference.

It was on the theme: “NPP Eastern Regional Unification and Thanksgiving Service.”

The service was interspersed with poignant and evocative Christian praise and worship songs that set the crowd, including the very important personalities and gospel musicians such as , Great Ampong, Nicholas Omane Acheampong , others  singing their hearts out and dancing.

The Eastern Regional Chairman, Hon Jeff Konadu Addo and his executives and their spouses, Members of Parliament in the region, party chieftains, senior government officials, the top brass of the security services, the clergy, diplomats as well as traditional rulers and members of the general public attended the service.

The Methodist Bishop of Akim Oda Diocese, Very Rev Isaac Kwame Boateng centered his sermon on leadership and how difficult the task of leading is.

He, therefore, implored followers and supporters of the NPP to support the regional executives to enable them to achieve their objectives for the common good of the party in the Eastern  Region.

He also counselled the followers to remain faithful to their leaders, while they serve with love and selflessness.

The Very Rev. Isaac Boateng urged the executives to promote the spirit of unity and serve with humility

He urged the grassroots of the party to follow the lead and instructions of the executives as well as help to keep them in check, adding that every executive was elected for a particular purpose.

Speaking to TodayGhanaMedia.com after the service, Mr. Jeff Konadu called on NPP members to offer prayers of thanksgiving to God for preserving the peace and unity during the regional internal elections.

Hon Jeff Konadu Addo said it was pertinent that the Eastern regional branch of NPP recognize God’s abundant blessings and mercies that resulted in the party’s polls, saying; “He has given us [the elected regional executives] the opportunity to serve the people of the New Patriotic party and mother Ghana and for that we have to give Him thanks and glory.”

“So on this day, it is appropriate that we renew our prayers for our party…let the Almighty continue to preserve the peace, the unity and the freedom of the party.”

Hon Jeff Konadu prayed that God endowed those who has been granted permission to serve party with the spirit of humility and service “so that they can address the needs of the party for progress and prosperity.”

He called on God to imbue in him the right spirit to lead the Eastern regional branch of the ruling New Patriotic Party on right path to retain power in 2024.

He expressed appreciation to delegates of the NPP for showing trust and confidence in him by electing him to lead the party in the Eastern region.

“It was a decision well made and we will surely not disappoint you.”

He said now that the elections were over, there is a need for all the party members to work collectively to make the region a haven for the NPP, adding, “We must eschew self-interest, petty squabbles and unite for the interest of the party. With a peaceful and united front, we will be able to consolidate and sustain the gains made and eventually break the eight-year governance cycle in the country.”

“I am forthright and focused with a strategic vision to see an attractive broad based, vibrant and dignified NPP in Eastern Region. With the support of every single member of our party in the region, we can,'” he said in an interview with My Ghana Media and Today Ghana Media.com  news editor

In his conclusion remarks,  “The party is again thankful to all party executives and campaign team members at the various levels, party sympathizers, volunteer groups, the media, members of the security agencies and all who have played diverse roles towards the peaceful conduct of the Eastern Regional NPP polls”.