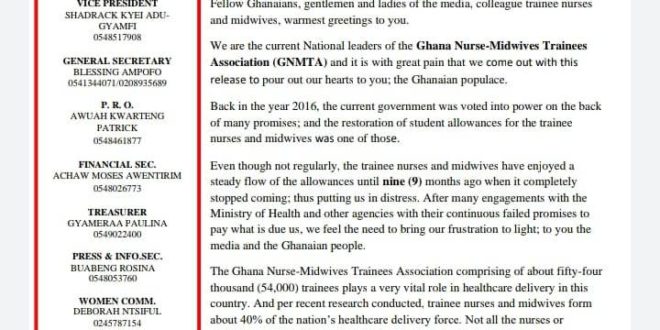 The Ghana Nurses and Midwives Trainees Association (GNMTA)  has hinted at a nationwide demonstration should the government refuse to pay them their nine-month allowance which is in arrears.

To this end, the Association issued a ten-day ultimatum to the government to settle all nine-month arrears.

The National Vice President of the Association, Shadrach Kyei Adu-Gyamfi in an interview with Obuoba Ofori Amanfo on Ahenkan Fm’s  “Maakye” Morning show monitored by TodayGhanaMedia.com,  said, all attempts to get the government and the Health Ministry to pay them have yielded no results hence their current decision.

He opined  that the government even promised them that their allowance has been released and it will be disperses to them soon but yet still no information  about it.

He noted that the ten-days ultimatum  which they issued has even come to an end, therefore they are going to engage the media and demonstrate against the government.

He says personnel will have no option but to advise themselves if  their allowances are not paid.

According to Mr. Adu-Gyamfi, the non-payment of the allowance continues to negatively impact members.

“Non-payment affects the psychology of trainees,” he opined.

Mr. Adu-Gyamfi stated that, the government is still owning those who has completed Nursing training  schools  for about four (4) months now.

Read the full statement below:  29th of April 2022, released a statement over the the same issues  demanding  for the payment of their allowances.