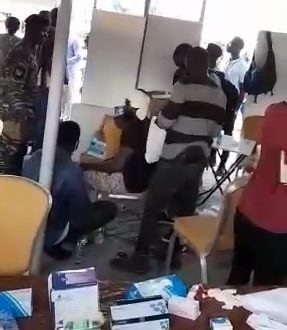 Four persons have been injured at the ongoing congress of the National Democratic Congress in Cape Coast.

The four are currently receiving treatment at the hospital. They sustained the injuries after the police fired warning shots to disperse the factions who were engaged in a scuffle.

The injured persons, however, did not sustain their injuries as a result of the warning shots from the police.

The election is being held at the campus of the University of Cape Coast (UCC).

The contest for the Women Organiser position is between the incumbent, Dr. Hanna Louisa Bisiw and a former Municipal Chief Executive (MCE) for Suhum, Margaret Ansei.

The party’s national executives election will take place at the Accra Sports Stadium on December 17.