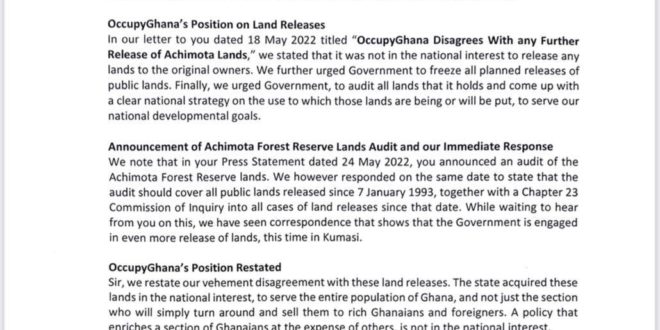 Spread the love
Pressure group OccupyGhana has cautioned the ministry of Land and Natural Resources  to stop all the release of public lands and render accounts to Ghanaians.
Occupy Ghana said in a statement  that, “Sir, we restate our vehement disagreement with these land releases. The state acquired these lands in the national interest, to serve the entire population of Ghana, and not just the section who will simply turn around and sell them to rich Ghanaians and foreigners. A policy that enriches a section of Ghanaians at the expense of others, is not in the national interest”

The advocacy follows recent revelations concerning the estate of the late CEO of the Forestry Commission, Mr Kwadwo Owusu Afriyie, who, according to an alleged leaked will, bequeathed some state lands to his relatives.

In our letter to you dated 18 May 2022 titled “OccupyGhana Disagrees With any Further Release of Achimota Lands,” we stated that it was not in the national interest to release any lands to the original owners. We further urged Government to freeze all planned releases of public lands. Finally, we urged Government, to audit all lands that it holds and come up with a clear national strategy on the use to which those lands are being or will be put, to serve our national developmental goals.

We note that in your Press Statement dated 24 May 2022, you announced an audit of the Achimota Forest Reserve lands. We however responded on the same date to state that the audit should cover all public lands released since 7 January 1993, together with a Chapter 23 Commission of Inquiry into all cases of land releases since that date. While waiting to hear from you on this, we have seen correspondence that shows that the Government is engaged in even more release of lands, this time in Kumasi.

Sir, we restate our vehement disagreement with these land releases. The state acquired these lands in the national interest, to serve the entire population of Ghana, and not just the section who will simply turn around and sell them to rich Ghanaians and foreigners. A policy that enriches a section of Ghanaians at the expense of others, is not in the national interest.

Further, regarding public lands, the Constitution makes three clear distinctions under articles 257 and 258:
(1) the citizens of Ghana are the actual owners of public lands, the holders of the allodial title;
(2) the President is merely the trustee of the citizens, and he has no direct powers of management over those lands; and
(3) the Lands Commission is the manager on behalf of the Government.

Under article 36 Government and Lands Commission cannot deal with public lands as they please, but only as the trustee and manager respectively, imposed with the duties of fiduciaries who are accountable to the citizens.

Thus, even the Supreme Court, absent evidence of breaches of the law, has considered itself constrained from stifling or subverting the Lands Commission’s independence or autonomy while acting as managers of public lands.

We submit that, as fiduciaries of public lands, both you and the Lands Commission cannot take actions that jeopardise the trust imposed on you by the Constitution. You certainly have no power to dispose of our lands FOR NOTHING and FOREVER, and without due account to the citizens of Ghana. Certainly, you, as Minister, cannot engage in the direct management of public lands, as your role is limited to making the binding written general policy directions to the Lands Commission.

We therefore challenge the Government to publish its policy governing these land releases justifying why it is disposing of the citizens’ allodial title FOR NOTHING and FOREVER, showing all the relevant factors and considerations that informed such a policy.

Then the citizens of Ghana, on whose behalf those lands are held in trust, can participate in the ensuing debate and make their voices heard, to ensure that the trustees and managers (as fiduciaries) do not have an unbridled power on how to handle that trust property.

Your duty as constitutionally composed fiduciaries demands that you act in the best interest of Ghanaians. You therefore have to explain to us how these land releases that deprive the citizens of their allodial title to the lands FOR NOTHING and FOREVER, is in our best interest. Your added constitutional duty to be accountable requires and expects you to justify your actions and decisions to those to whom you owe that duty, the people.

Sir, we firmly believe that the land releases are illegal and unconstitutional, and we call upon the Government to immediately reverse such releases and make room for a national debate on this matter. Simply put, you are not allowed to arbitrarily dispose of the family silver and heirlooms without accounting to us, the true owners.

Yours in the service of God and Country,
OccupyGhana