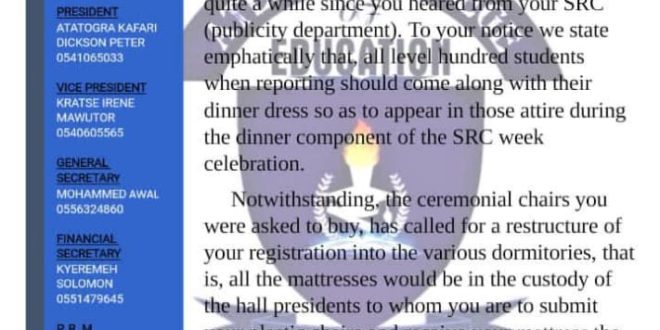 The Students Representative Council (SRC) of the Atebubu College of Education in a recent communique has directed all level 100 students to report to school with plastic chairs next semester.

The directive according to the information gathered is due to the school’s lack of adequate furniture.

“Notwithstanding, the ceremonial chairs you were asked to buy, has called for a restructure of your registration into the various dormitories, that is, all the mattresses will be in the custody of the hall presidents to whom you are to submit your plastic chairs and receive your mattresses the number of which will be recorded against your name,” the communique directed students.

In addition, students are warned not to bring gallons to campus for storage of water.

The SRC has also warned students from taking furniture to sit outside the classrooms. 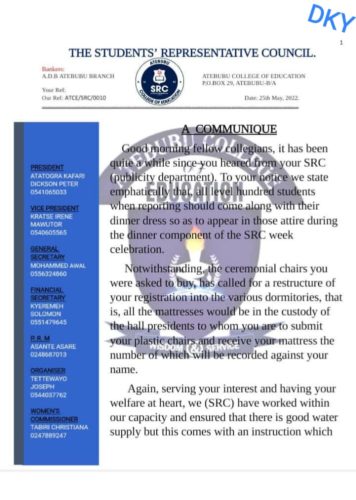 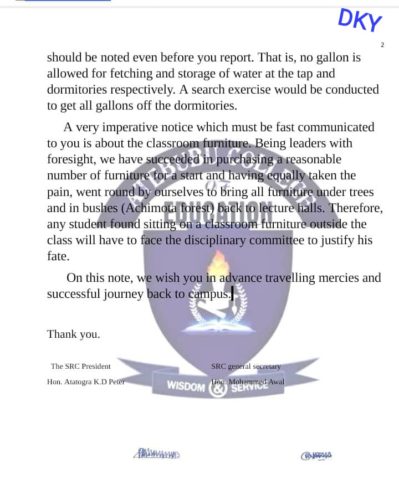 From the Concerned Students of Atebubu College of education

Atebubu college of education is a teacher training college located within the Atebubu Amantin Municipality in the Bono East Region that was founded in October 1965.  It is also the only college of education located in the eastern corridor of the then Brong Ahafo  Region. The college has a population of about 1745 Students and 108 staff members with Doctor Samuel Addae- Boateng  as the principal.

The school has core values of pursuing relentless academic excellence, embracing diversity and inclusion, believing in hardwork, integrity and honesty and to exist as an institution primarily because of students. Students who have  passes in  Mathematics, English and Science or Social studies and three other passes in their elective subjects are qualified to be offered  admission to pursue the Four-Year B.ed program.

The Students Representative Council (SRC)  of the Atebubu college of education in a recent communique has directed that all level hundred students are to come along with plastic chairs when coming to school next semester just because the school is lacking furniture The level hundred students in a response is asking for the legal basis on which the SRC is using to ask students to bring chairs to school.

It is all known that it the responsibility of the Government to procure furniture for use by students. In these times of the economic hardships impending on students and parents, students are in addition required to bring chairs to school.  Students have in the last four months not received their allowances and so most of them haven’t even being able to pay their exam fees.

Level hundreds of Atebubu college of education are calling on all media houses and stakeholders of education to come to  their rescue. They are demanding that the SRC removes that obnoxious,problematic and discriminatory policy requesting that all level hundred students come to school with plastic chairs in their first year second semester.

By  Concerned Students of Atebubu College of education