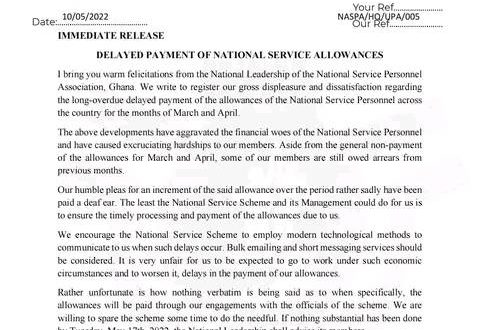 Angry NSS Personnel To Hit Street Over Non-Payment Of Allowances

Aggrieved National Service  Personnel have threatened to embark on strike or demonstration if their allowances are not paid.

The National Service Secretariat (NSS) after managing to pay the January and February allowance of personnel in March 22, 2022 is now unable to pay for March and April 2022 as personnel claim they are suffering.

The National Service Personnel Association (NASPA) called are also calling on the scheme not only to pay them their two months’ arrears but to also increase the “meager” Ghc559 otherwise a protest could hit the scheme.

A statement released by the National Executive Committee of the National Service Personnel Association (NASPA) says personnel will have no option but to advise themselves if by 17th May 2022 their allowances are not paid.

In a statement signed by  the National President of NASPA,  Emmanuel Brimpong Akosah and co-endorsed by 9 other Regional Presidents, the group said it is “rather unfortunate” that the National Secretariat of the Service is not coming up with any meaningful explanation for the delayed arrears.

The leaders of the association said per consultations with the management of the National Service Scheme (NSS), they see no sign that the allowances will be paid anytime soon.

National Service Personnel in the country have over the weeks been lamenting the hardship they are going through as they have not been paid their allowances.

Some personnel have reportedly not received any allowance since October 2021.

Read Their Full Statement below:

Previous Election 2024: We Have Solid Team To Break The Eight – Jaman North DCE
Next GNMTA Demands For Payment Of Their 8-Month Unpaid Allowances From Gov’t