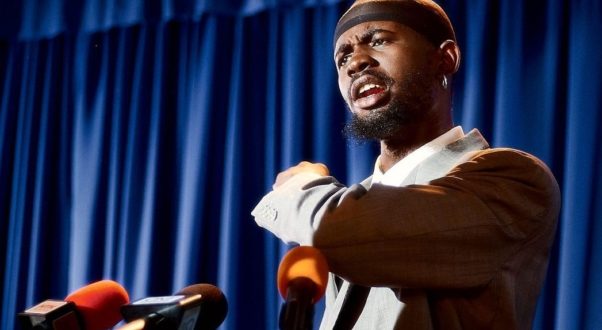 Ghanaian artiste, Black Sherif  has released a new song called ‘Soja’ on Thursday, September 22, 2022 and many of his fans have shown excitement on social media.

Blacko as he is affectionately called who is also a BET Best International Act nominee, dropped a short video while rapping to a portion of his newly released banger titled ‘Soja’.

This comes off the benchmark of his smash hit single, ‘Kwaku The Traveller’ which was released in March this year.

The song which topped charts across the various digital streaming platforms with its enormous global crossover prowess was co-signed by a lot of industry greats such as DJ Khaled, Timberland among others.

This was after he became the first Ghanaian artist to reach the 100 million streams milestone on the streaming platform.

See also  Ghanaian Music Star Black Sherif Grabs 2022 BET Hip-Hop Nomination For Ghana
n the video he rapped with so much passion and enthusiasm as he poured out his heart in the song.
Many music lovers have taken to social media to express their excitement about the newly released song which was dropped on all music streaming platforms at midnight on September 22, 2022.

“My mystery box is somewhere very near, I feel it inside me, I am feeling very weird”
Soja|| Black Sherif

I’ve said it once and I’ll say it again it’s time to add Black Sherif to the song writer conversation.

listening to Black sherif Soja, i feel he’s scared he might lose when he’s already a winner.. Blacko is ready

"Soja" is the 4th track off "The villain I never was" album by Black Sherif which drops on 7th October, 2022.

Save the date. Something big is coming pic.twitter.com/trXGSltBkd