Breaking News
Home / Politics / Information Minister: When President Akufo-Addo Talked About Africa Beyond Aid, He Was Mocked But The World Is Catching Up With It 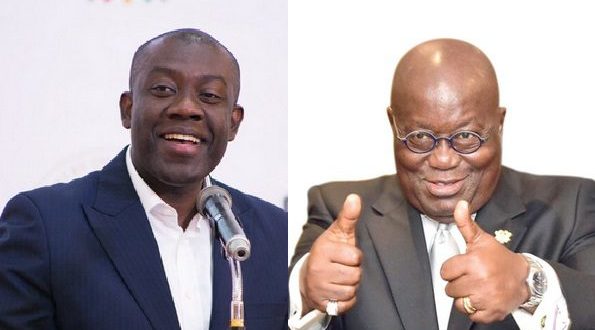 The Information Minister Kojo Oppong Nkrumah has said that the world is gradually catching up with the concept of the AfricaBeyond aid agenda.

He stated that when President Nana Addo Dankwa Akufo-Addo first raised this concept, he was mocked but gradually this idea is being accepted by the world.

“When @NAkufoAddo first raised this subject, he was mocked. Gradually, the world is catching up with the concept. May it succeed,” the Ofoase-Ayirebi lawmaker tweeted.

It is recalled that President Nana Addo Dankwa Akufo-Addo in 2019 said Africa’s transformation Beyond Aid was a must as “Africa is eager, Africa is willing”.

When @NAkufoAddo first raised this subject, he was mocked. Gradually, the world is catching up with the concept. May it succeed. https://t.co/NA3DhHBoSI

President Akufo-Addo was speaking at the opening of the first leg of the African Caucus Meeting of World Bank and International Monetary Fund (IMF) Governors in Accra.

#AfricaBeyondAid is not about Africa without aid. It is about doing aid & devlpmt better. It is about fostering investment for growth & #SDGs

The event was held under the theme: “Africa Beyond Aid: Enhancing Institutional Capacity and Innovative Finance for Sustainable Growth.”

The African Caucus was established in 1963, as the “African Group,” with the objective of strengthening the voice of African Governors in the Bretton Woods Institutions- the IMF and the World Bank Group- on development issues of particular interest to Africa.

President Akufo-Addo said working together with the people of Africa and with the educated, skilled and self-confident Africa, an Africa Beyond Aid, “we can, and we should; let us get to work.”

He said, “Since assuming the reins of Office, two and a half years ago, I have been advocating for a Ghana Beyond Aid, because nobody needs to spell it out to us that the economic transformation we desire will not come through aid”.

He said the truth is that even if there is no aid fatigue; and with the best will in the world and the most charitable government in place in the so-called donor countries, there would never be enough aid to develop Ghana or Africa to the level desired.

“Aid is never meant to be what will bring us to the status of a developed nation or continent,” he said.

President Akufo-Addo said despite the peculiarities of the circumstances of African countries, there are a few fundamental conditions that must be satisfied in order to accelerate the drive to wealth and development and to realise the vision of an Africa Beyond Aid.

He said these fundamental conditions are a self-reliant Africa, exploiting her immense resources to provide a dignified, decent standard of living for the peoples.
President Akufo-Addo said to get to the destination of Africa Beyond Aid, the continent would have to harness effectively its own resources and deploy them creatively and efficiently for rapid economic and social transformation.

“We need a lot of resources to generate the prosperity we want in Africa,” he said.

President Akufo-Addo said whilst the continent strives to do more to increase domestic revenue mobilization and leverage on technology to strengthen the performance of their revenue institutions, they must also take cognizance of how the revenue was spent and accounted for.

He said transparent budget and expenditure management systems that allocate resources wisely to agreed national priorities, that effectively monitors their implementation, were of the utmost importance.

President Akufo-Addo said it is self-evident that the future economy of Africa could not be the raw material producing and exporting economy of the past.
“It has to be an economy based on value-addition and industrial activities, if we are to create prosperity and generate jobs for our peoples, especially for our youth,” he said.

He called for increased trade and investment as this would be a significant boost to the continent efforts at industrialization and agricultural modernization.
President Akufo-Addo said the prosperity would also come from the free movement of skilled Africans, moving across the continent to make better use of their talents and contributing to growth and prosperity right in Africa, rather than in other continents.

Previous Everton Offered Me A Great Opportunity; I Wanted To Try It – Mohammed Kudus
Next Stay Away From Sex If You Want To Live Longer – Highlife Legend Uncle Ebo To Youths