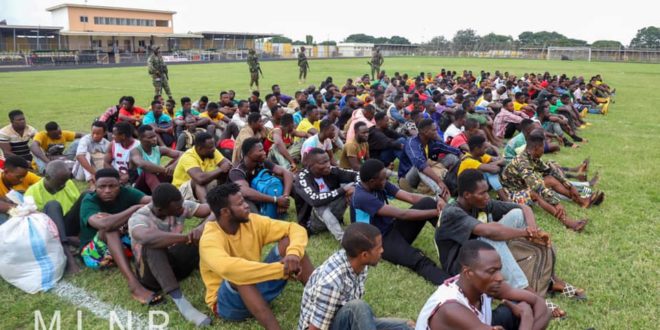 The Union said this is to avoid needless cost of feeding in case they are found guilty and imprisoned. “The law must deal with Ghanaians involved accordingly” the Union stated.

In a statement issued on September 17, MLGWUI said it deems this suggestion necessary in the wake of the arrest of 164 Illegal migrant workers in the Eastern Region by Military anti-galamsey taskforce, Operation Halt II.

“Although there is evidence that most African citizens are unemployed, especially in Ghana, MLGWUI does not tolerate illegal working activities. We are therefore asking patriotic citizens and regular migrant workers to report all illegal mining and illegal sex activities to the Ghana Immigration Service and other national security agencies because MLGWUI supports government’s Operations Halt initiative

It is the mission of MLGWUI to ensure decent work, social justice, protection, education, occupational safety and health for migrant workers, refugees, volunteers, investors and diasporans as well as supporting and promoting culture and tourism for foreigners in Africa. So the Union will play its role to expose notorious sex workers and migrant workers,” the statement added.

The MLGWUI therefore requested the Ghana Immigration Service to team up with Ghana Armed Forces to conduct intensive operations in budget hotels and night gathering places and arrest migrant sex workers and their Ghanaian counterparts.

MLGWUI Suggests for  Deportation of Suspected Immigrant Sex and Mining Workers.
Migrant Labour General Workers Union International with her Finnish-French Migrant Resource Centre MLGWUI-FFMRC) is humbly suggesting and asking Judicial Service of Ghana to use judicial process and mechanism to persecute and ensure Fair Deportation of recent arrest of suspected illegal  (Im)migrant Sex and Mining Workers among 164 suspects to avoid time spending and cost of feeding in case of found them guilty and imprisionment. Law must deal with Ghanaians involved.
MLGWUI is in view that agents or agencies who are importing illegal Immigrant Sex and  Mining Workers into the country are very much aware of current laws in Ghana.
MLGWUI deems this immediate suggestion necessary when this international migrant labour heard Arrest of 164 Illegal Migrant Workers in the Eastern part of the Republic of Ghana by Military anti-galamsey taskforce, Operation Halt II initiative.
Although there is evident most of Africa citizens are in unemployment  situation especially in Ghana as country, MLGWUI does not tolerate illegal working activities and therefore asking patrotic citizens and Regular Migrant Workers  to report all foreseen illegal mining and illegal sex activities to Ghana Immigration Service and other national security agencies because MLGWUI supports government of Ghana Operations Halt initiative.
It is the mission of MLGWUI to ensure Decent Work,  Social Justice, Protection, Education Occupational Safety and Health for (Im)migrant Workers Refugees, Volunteers, Investors and Diasporans as well as supporting promoting Culture and Tourism for foreigners in Africa. So the union will play its quota to expose uncultured  notorious Sex Workers and (Im)migrant Workers are and will be engaged irregular and illegal working activities in labour migration and regional integration.
MLGWUI is therefore  humbly asking Ghana Immigration Service to team up Ghana Military force and conduct intensive immediate operation in budget hotels, home and night gathering and arrest illegal Immigrant Sex Workers with Ghanaians counterparts who have been lodging in hotels as Guests and causing nuisance to regular  Guests and vacinity more stay more three years which beyond Tourism mandatory period, withiout Hotel Registration Records.
MLGWUI applauds Ghana Armed Forces that forms part of government’s fight against illegal mining.
On April, 5, 2022, a Nigerian Notorious Sex Worker Ms Adaa with body guide attacked one of staff of MLGWUI at Adabraka, lynched his hands threatening to hand over his phone to her where staff of hotel and people in the vacinity  witnessed. The victim reported the incidence to the management of the hotel but they did nothing about the situation.
Prostitutes known in labour migration as Sex Workers referred to as one class in labour  migration that in some countries might have accepted their activities but in Ghana, MLGWUI is saying “never recognising them today or tomorrow”.
In attempt to reduce this social and illegal sex working threat, MLGWUI’s interactions with some small scale hospitality and budget hotel operators on why their hotels but no brothels have Sex Workers as full house daily, one operator said “The reason why I cannot control them: I once initiated police reporting in dealing with this nuisance situation but the suspected illegal Sex Guest turned the case again me as the Manager.”  “Another factor is due to low customers patronage so admitting illegal Sex Workers as Guests in long staying or lodging is helping hotel enabling paying of utility bills, annual rates and met wages/salaries and all sundries cost.”
MLGWUI sees the sex work in Ghana as a threat to Ghanaian culture and societal norms if stakeholders in relevant sectors and leaders of the country  do not find immediate  solution.
Police are doing their best but after arrest of   illegal Sex Workers, their Ghanaian partners or sex leaders or customers come for immediate release and they go back continue practising sex work with their personal guides or assistants so called “Ashawo Police” as jardon term in sex working migration.
MLGWUI as one of Stakeholders in Migration, respecting  relevant Ministries and their agencies, Ghana Immigration Service, international migration agencies in Ghana as well as hospitality and tourism industrial prayers and humbly asking said institutions to map up a strategy in order to reduce illegal sex and mining work in Ghana and beyond. “If stakeholders in labour migration in Ghana do not take immediate action, Immigrant (foreigners) Sex Workers who are still importing illegal sex youth workers into country every week will entice many Ghanaian female youth into sex work (Prostitution) to increase the illegal sex working practice rate of 30% in street of Ghana in 2024.”
MLGWUI therefore, in other hand, urges hospitality and tourism industrial prayers or operators to employ Marketing Workers to seek for Customers for them as regular and short-time Guests.
See also  Manchester United End Leaders Arsenal’s 100% Record
See also  Osafo Maafo Must Apologize For ‘Galamsey Queen’ Comments – Public Interest Advocate