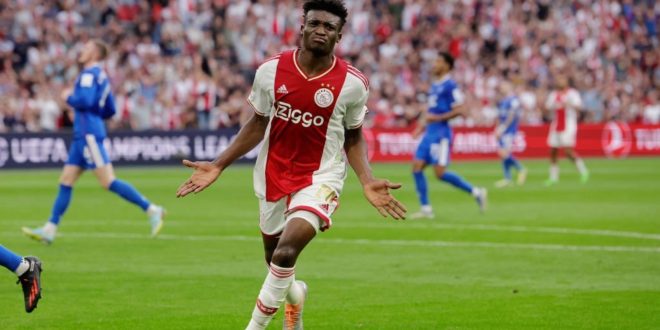 Ghana international  Kudus Mohammed’s strike on the 27th minute cancelled out an earlier goal scored by Egyptian forward Mohamed Salah on the 17th minute of the game.

Below is the video of the goal.

What a screamer from 🇬🇭 Mohammed Kudus. No keeper stops that!pic.twitter.com/ENXq9X01Ts

If you want to relive Kudus Mohammed’s goal against Liverpool!

The last time Mohammed Kudus visited Anfield, he left the pitch after just six minutes when all eyes were on him to explode in that game. Tonight, he has come again and the world will know.

Mohammed Kudus narrates how his UEFA Champions League debut ended pre-maturely after suffering a meniscus injury in the Ajax vs Liverpool game.

🇬🇭 Mohammed Kudus narrates how his UEFA Champions League debut ended pre-maturely after suffering a meniscus injury in the Ajax vs Liverpool game.pic.twitter.com/wbqyHUJE2n