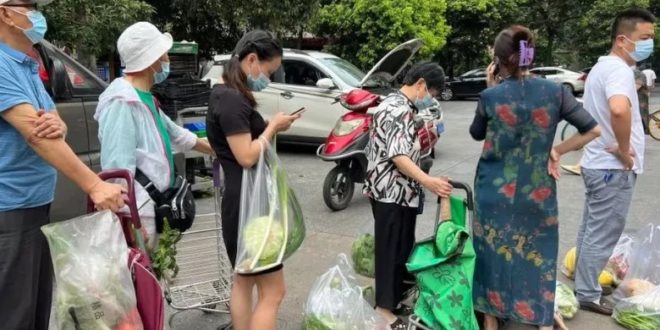 Residents under COVID lockdowns in areas across China are complaining of shortages of food and essential items.

Tens of millions of people in at least 30 regions have been ordered to stay at home under partial or full lockdowns.

“It’s been 15 days, we are out of flour, rice, eggs. From days ago, we run out of milk for kids,” said one resident in western Xinjiang.

Authorities are scrambling to contain local outbreaks ahead of the Communist party’s congress in October.

China’s zero-Covid policy requires strict lockdowns – even if just a handful of cases are reported. On Monday China recorded 949 new Covid cases across the entire country.

The policy has prompted rare public dissent from citizens and has also been accused of stifling economic growth.

In Xinjiang a weeks-long lockdown in the Ili Kazakh Autonomous Prefecture near the border with Kazakhstan has seen desperate residents appeal for help on social media.

One post showed a video of an Uyghur man overcome with emotion, saying his three children had not eaten for three days.

In Yining city, the capital of Ili, a shared online document with over 300 urgent requests for food, medicine and sanitary pads was widely circulated.

“I’m out of money to buy supplies. My wife is pregnant and we have two kids. We are running out of gas. My wife needs a medical check,” said another resident.

The region has a mixed population of Han Chinese, Kazakh and Uyghur residents.

Earlier this month a long-awaited UN report accused China of “serious human rights violations” against Uyghurs and other mainly Muslim minorities in Xinjiang. Rights groups say that more than a million Uyghurs had been detained against their will. Beijing says its network of camps are a tool to fight terrorism.

In south-western Guizhou province, authorities locked down an area of the provincial capital Guiyang without warning, stranding 500,000 residents at home without any chance to prepare.

Lifts were switched off in buildings to stop people leaving, the Guardian newspaper reported.

“We can’t buy stuff online as they don’t deliver and supermarkets are closed. Is the government treating us like animals, or do they just want us to die?” asked one user on the Weibo microblogging platform, quoted by the Guardian.

Meanwhile Chengdu, the capital of Sichuan province, is the largest city to come under lockdown since Shanghai suffered two months of restrictions earlier this year.

Its 21 million people have been banned from entering or leaving the city, with only residents able to show evidence of a negative Covid test allowed out to buy necessities.

It follows a major heatwave in the region and an earthquake earlier this month which saw residents trying to flee their homes confronted by locked exits.

City officials say they are planning to lift restrictions in five areas of the city starting on Monday.

The multiple extended lockdowns come ahead of the National Party Congress in mid-October – a once-in-five-years event that will see top political members gather for the first time since the pandemic struck.

Party officials are under immense pressure to makes sure the event runs smoothly, and even small clusters of Covid are seen as a threat.

On Monday Chinese media said small numbers of cases were being detected on university campuses in Beijing as students returned from other provinces.

It is the world’s last major economy attempting to entirely stamp out Covid outbreaks, claiming this is necessary to prevent wider surges of the virus which could overwhelm hospitals.

China has officially recorded fewer than 15,000 deaths since the pandemic began, according to Johns Hopkins University.