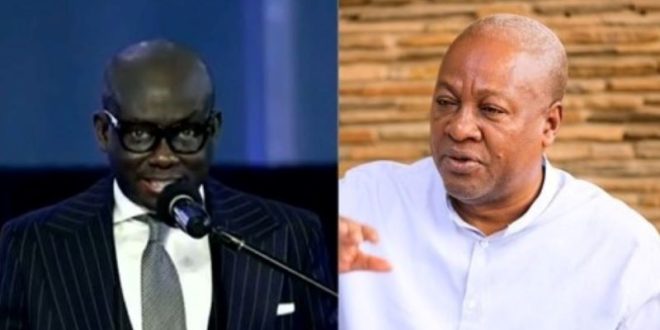 According to the Attorney General, the 2020 flagbearer of the opposition National Democratic Congress (NDC) has developed the penchant of criticising the Judiciary unnecessarily.

The attitude of the former President, the Attorney General said is deplorable and unbecoming of a former Head of State.

Mr. Mahama has mounted serious campaign to villify the judges.

He is hesrd on several occasions criticising the judiciary after he lost the Election Petition he filed at the Supreme Court after the 2020 polls.

His freshest comment on the judiciary was when he was speaking at the NDC’s Lawyers’ Conference on Sunday, August 28, 2022.

He said it will take a new Chief Justice to repair the ‘broken image’ of the Judiciary.

According to him, the current leadership of the Judiciary lacks what it takes to redeem its sunken image, hence the need for a new Chief Justice.

Mr. Mahama believes the current state of the judiciary has sunk so low that it has lost the trust and faith of the ordinary person.

“So badly has the image of our Judiciary deteriorated that many of our citizenry openly make mockery of our justice system and of our justices. The phrase ‘Go to Court’ in these days is met with derisive laughter, instead of hope that one will truly get justice”.

“There is therefore the urgent need for the Ghanaian Judiciary to work to win the trust and confidence of the citizenry, and erase the widely held perception of hostility and political bias in legal proceedings at the highest courts of the land”, the former President said.

He mentioned, that the current leadership of the Judiciary lacks the qualities to redeem its sunken image, hence the need for a new Chief Justice.

“Unfortunately, we have no hope that the current leadership of our Judiciary can lead such a process of change. We can only hope, that a new Chief Justice will lead the process to repair the broken image that our Judiciary has acquired over the last few years”.

Responding to the comment of the former President, the Attorney General said at the Bar Conference under the theme: Ghana’s democracy under the Fourth Republic – Gains, Challenges
and Prospects believes that the Judiciary has shown consistently that it is the last line of defence for our country.

“It was thus with great dismay and embarrassment that I heard a person who has occupied the highest office of State, former President John Mahama, recently launched an unwarranted attack on the integrity of Ghana’s Judiciary. And I observed that this was really the latest instalment of systematic and caustic attacks on our courts by the former President, albeit unjustified.

“I am compelled to comment on same in this address because they border on the security of the state and constitute a deliberate pattern of conduct aimed at undermining the independence of the Judiciary, an arm of government whose autonomy is crucial to its proper functioning. Such conduct is clearly deplorable, coming from one who has occupied the highest office of President and aspires again to that office.

“At this moment, it is important for all to note that I express this sentiment not because I stand in opposition to former President Mahama as a politician.”

Listen to the audios below: