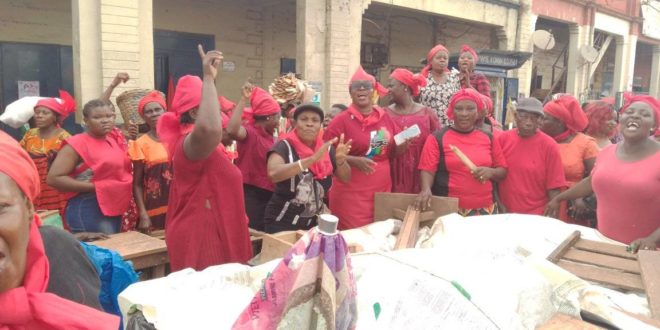 You Deserve To Be Chased With Machete, Teargas And Pure Water – Oda Traders To MP [Audio]

Traders at the Oda main Market in the Birim Central Municipal Assembly of the Eastern Region are reminding government to stop delaying on fixing their market which was struck by an inferno a year ago.

According to them, they have demonstrated severally on their market which got completely burnt last year on the 13th of September, 2021 yet no action has been taken towards the market by authorities.

They pleaded that, they want the Member of Parliament for Akim Oda Constituency, Hon. Alexander Akwasi Acquah and the government to fix the market so that they can continue trading there because they are not ready to relocate anywhere.

Some added that, they are not comfortable relocating because they got hinted that the Assembly is planning to rebuild the market after they have been moved in order to sell the trading spaces at high prices to others.

They complained that, the support funds given to them by the government to compensate them on their losses due to the inferno, was shared unfairly with most of them getting nothing so those in charge of the funds should do the right thing.
Others also shared that, although they got some of the support funds, they found out that it was a grant from government instead of it being introduced as a loan so they will not pay.

They again added that, rumours that their last demonstration was led by members of the opposition in government, the National Democratic Congress and that some of the demonstrators apologized is a lie as most of them are members of the New Patriotic Party.

They stressed that, comparison to other demonstrations in other parts of the country, will show that they were fair in their demonstration against the government and the Member of Parliament of the Akyem Oda Constituency, Hon. Alexander Akwasi Acquah because he  deserved to be chased with a machete, tear gas and pure water for disappointing them.

They concluded that, if their grievances are not attended to, they will decide what to do in the next general elections.

Previous Attorney General Has All My Support To Prosecute Aisha Huang – Akufo-Addo
Next No Gov’t Under The Fourth Republic Has Constructed More Roads Than NPP – Dr. Bawumia