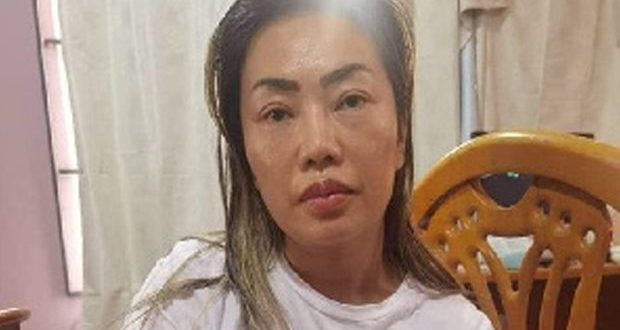 Seasoned Journalist,  Abdul Malik Kwaku Baako Jnr, has revealed that Aisha Huang, the Chinese galamsey ‘queen’ who was arrested recently, has a series of recorded sex videos involving “big men”, which she uses to blackmail them.

According to the Editor-in-chief of the New Crusading Guide newspaper, the notorious Chinese galamseyer has recordings of sex acts captured on camera as well as audio files with private discussions of certain Ghanaian men in positions of authority.

He claimed that Huang, who had been detained numerous times, always managed to have herself released, demonstrating how “powerful” she was.

He noted that in addition to the ‘skills’ she acquired in the John Mahama-led government, Aisha Huang had also established connections in the present administration run by President Akufo-Addo, a move Baako claims enables her to escape any danger.

“This particular Chinese woman, I have it on record, was arrested three times during the previous administration, three times she was released, a very powerful woman who operates more within the Ashanti Region, especially Kumasi.

“She’s got connections, from my checks, also in this administration. She appears to be a very smooth operative. She’s built a network across the political divide, her agents placed in state institutions; and she’s able to riggle herself out of danger or trouble anytime she’s touched,” he revealed, adding “I hope it doesn’t happen this time around.”

Mr. Baako further disclosed, “…And she’s got accomplices ㅡ the other one is called Monica, they’re powerful. Part of their strength is that they resorted to a certain system of blackmailing. Look, they have video and audio recordings of powerful people, people who have been entrusted with responsibilities to protect us as a people. That’s how dangerous the game is. That’s where the strength of these powerful women is coming from.”

He added, “They have videos and audio recordings of conversations with some strategically placed persons from then and now; and some they are having sex with. They have girls, mainly Chinese whom they brought into town to sleep with these big men or big guys well-placed; and they use it to blackmail them into submission, that’s how powerful they are.”

According to Mr. Baako, although there have been calls to free Huang, the people receiving the calls should be aware of whom they are speaking to and, if possible, expose them. This will, in his opinion, put an end to the Aisha Huang situation and result in her being charged.

“That’s why those who are receiving the calls from the so-called power brokers must be sure who is calling them, and they must expose them if indeed they’re working for the system, it’s part of the cure,” he told the programme host.

He continued that the Chinese nationals have managed to place their agents in key positions in the country, particularly the security agencies.

The veteran journalist added that the Chinese nationals were not engaged in galamsey activities when they came to the country, but gradually began drifting towards that sector.

He said they have since been using recordings obtained from their sexual escapades with top officials to keep the officials under their thumb.

“Part of their strength is that they built up a certain system of blackmailing. They are women so I’m not going to use certain words and I’m not going to say certain things as to when they came into town, what they began to do, but they had nothing to do with galamsey. Gradually, they moved from that particular trade into galamsey,” he stressed.

Aisha Huang was recently arrested for engaging in galamsey-related activities.

She is reported to have entered the country via the Togo border after her deportation.

She has since been remanded and is set to make a court appearance with three others on September 14.