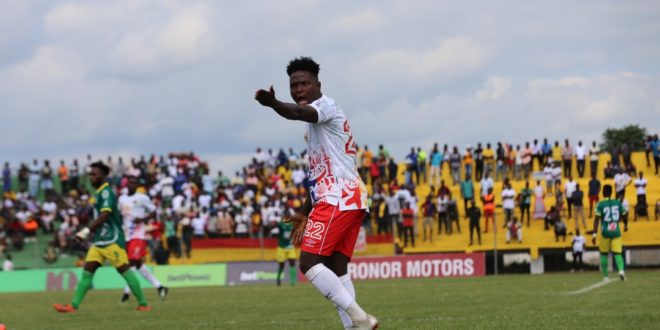 Accra Hearts of Oak’s first game of the 2022/23 season ends in a defeat after slipping to a narrow 1-0 loss to Aduana Stars at the Nana Agyemang Badu II Stadium, thanks to Bright Adjei’s second half goal.

Coach Paa Kwasi Fabin men begun really well and made some early incursions but all their efforts were checked by the Hearts of Oak backline.

The first half was an even one as both teams took the game to each other and had what looked like glorious opportunities coming their way but none of the two sides could find the back of the net.

Central African International, Yassan Ouatching was put through on the right flanks, made a decent run and sent in a cross which nearly resulted in an own goal but was piled out by Yaw Ansah Fufro for a wasted corner kick.

Aduana Stars were given a free kick on the 35th minute. Returnee Stephen Anokye Badu went in for a power from 30 yards but missed the post by inches.

Aduana Stars broke on a counter once again after a long ball was delivered to Bright Adjei upfield, he nicely went into Mohammed Alhassan and sent in a decent pass at far post to locate Sam Adams but a timely intervention from Eric Ofori Antwi rescued the situation.

On the stroke of half time, Gladson Awako laid off a pass to Dennis Korsah who raced above two defenders to get into the box but his effort went off the crossbar. Just unlucky to mark a goalless first half.

In the second half, Aduana Stars returned on a higher note to snatch the lead just three minutes from the break.

Skipper, Bright Adjei with the goal after connecting into the net to a sumptuous pass from Sam Adams.

Hearts of Oak nearly got a quick response after Afriyie Barnieh got his way through and picked up Suraj Seidu- whose shot was stopped by the opposition backline.

The encounter turned into an aggressive one in the last fifteen minutes with both teams going hard and strong at each other, leaving an interesting display in Dormaa.

The visitors ended the game with ten men after Caleb Amankwah was shown a second yellow card on the 89th minute. It finished 1-0 for Aduana Stars after full time.