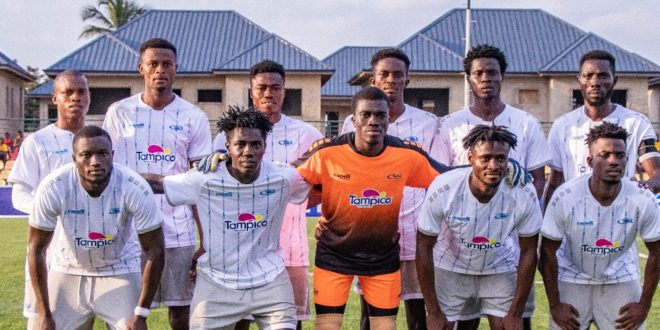 Newly-promoted Ghana Premier League side, Akyem Kotoku Royals, has picked his first 11 for his first official game this afternoon against  Accra Lions at the Cape Coast Stadium.

Coach Seth Ablade has opted for last season’s first choice goalkeeper, Clinton Quaye a in goal for the season opener.

Akyem Kotoku Royals, will begin their campaign with a home game against Accra Lions at the Cape Coast Stadium.

The Akyem-based club have to use the Cape Coast stadium as their home venue after the Akyim-Oda Park was deemed unfit to host topflight games.

Meanwhile, after a decent first season in the Ghana Premier League, Accra Lions will be hoping to finish in the upper half of the table.

It is today, our first match against @AccraLionsFC. We go for win today
. The whole Cape Coast turns blue for Kotoku Royals FC #kotokuroyalsfc #betpawapremierleague pic.twitter.com/sUQZzf6WCc

KICKOFF TIME is 3pm and will be live on StarTimes.

Below is the both Kotoku Royals And Accra Lions FC lineup:

Which game are you looking forward to the most ? #betPawaGPLwk1#BringBackTheLove 🇬🇭 pic.twitter.com/SGrHYXbWme