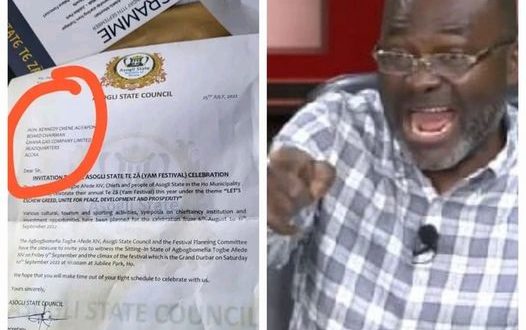 The member of parliament for Assin Central and NPP Presidential Candidate hopeful, Kennedy Ohene Agyapong tropped on Friday, 9th September 2022 after it was reported that the Agbogbomefia of the Asogli State, Togbe Afede XIV, rejected gift items the MP has presented to him.

Many were astonished to hear that his gift to the Asogli State had been rejected considering the cordial nature of Togbe Afede XVI.

According to reports, Kennedy Agyapong had been turned down because of certain utterances he had made in past. He was accused of saying that negative things about the Togbe. One of then include using his power to get certain things that he wasn’t deserving of. Many felt Kennedy Agyapong went to the Yam festival because he wanted to garner for votes for the upcoming NPP conference to elect a leader

Amidst the backlash and rumors surrounding what might have caused the volta chief to publicly reprimand the lawmaker, a letter which has surfaced on the social media prove that Kennedy Agyapong graced this year’s Yam Festival based on an invited from the Asogli State.

In the document available to TodayGhanaMedia.com indicates that, the Asogli State through their Secretary that invited the Assin central law maker to the festival.  According to the letter dated 25th July 2022, Kennedy was invited to the event that came off yesterday and even called to also come for the grand durbar slated for today. It is thus confusing that there are reports that the gifts of the aspiring flagbearer will be rejected.

It is yet to be seen if these are mere rumors or indeed Kennedy was invited but his gifts rejected because of certain commentary he had made. The Volta Region has never been a favorable ground for the NPP and many feel this was planned to disgrace the flagbearer.

Interestingly, many remember what happened when a chief in the Volta Region was tasked by President Akufo-Addo to finish an E-Block started by John Mahama if he felt the project was being stalled. Again during some tidal wave accidents, the president and his vice all failed to visit the place, some say what happened to Kennedy is a dress rehearsal for what will happen to the NPP. Is it the case that Kennedy wasn’t really rejected but mere propaganda is being spread. ..read?

Read  the statement below