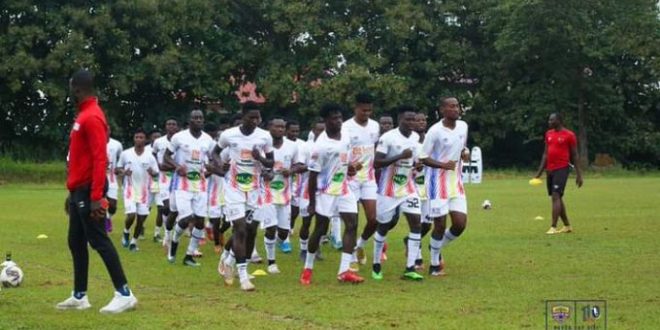 Hearts of Oak coach Samuel Boadu has named his squad for the club’s first Ghana Premier League of the new season.

The Phobians will travel to Dormaa to face Aduana Stars in what is expected to be an exciting match as both teams look to get off to a winning start.

Boadu has named 25 players for the trip, which includes Daniel Afriyie Barnieh, who has been named to the Black Stars squad for friendlies against Brazil and Nicaragua, as well as new signings Eric Esso, Junior Kaaba, Eric Ofori Antwi, and Konadu Yiadom.

The team will, however, be without Ibrahim Salifu, Abdul Mamane Lawali, and new signing Linda Mtange.

Hearts of Oak will arrive in Bono Region on Saturday, with the game scheduled to begin at 3 p.m. local time on Sunday.

Hearts of Oak have set their sights on winning the championship after finishing sixth last season, 19 points behind champions Asante Kotoko.

Below is the 25-man Hearts of Oak squad